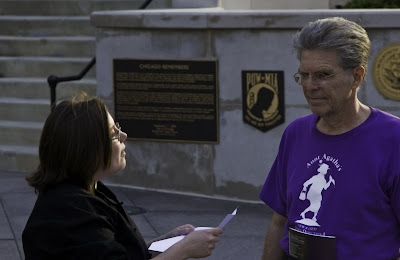 "As a political position, I hold on to grief." Photo by Luis Soto.

Photograph from the 2008 street performance of Karmin's public poem "4000 Words 4000 Dead," downtown Chicago at the Vietnam War Memorial for the Looptopia festival.

after I, Afterlife: Essay in Mourning Time (Essay Press, 2007) by Kristin Prevallet: JENNIFER KARMIN’s text-sound epic Aaaaaaaaaaalice will be published by Flim Forum Press in 2009. At home in Chicago, she curates the Red Rover Series and is a founding member of the public art group Anti Gravity Surprise. Her multidisciplinary projects have been presented across the U.S. and Japan at festivals, community centers, artist-run spaces, and on city streets.
Posted ∀ at 4:56 PM

Email ThisBlogThis!Share to TwitterShare to FacebookShare to Pinterest
Labels: Forums, O Say Can You See