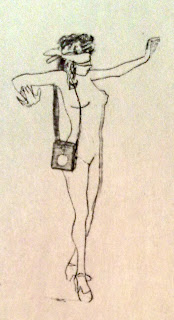 Since Baroness von Elsa paraded down the street naked save for black paint. Since she wore shower curtain rings as bracelets and postage stamps as beauty marks. Since Hannah Weiner wrote WORD on her forehead and staged the first “Fashion Show Poetry Event.” Since Mina Loy crafted thermometer earrings. Since Sylvia Plath posed in swimwear for her college newspaper’s fashion column. Since the same Sylvia Plath spent her post-divorce money on clothes instead of groceries (girl, I did the same thing). Since Harryette Mullen wrote Trimmings. Since Gertrude Stein wrote Tender Buttons.

In a recent google search on Emily Dickinson, I came across this: “Emily Dickinson was a shy crazy lady who dressed all in white.”

Fashion and its relation to writing, or women writers, is not limited to poets of course. Would Joan Didion be Joan Didion without those massive so-L.A. sunglasses? Who could forget that image of her standing next to a Corvette, a shroud of cigarette smoke obscuring her face, her thin frame sleek in that 70s gown? And while Zadie Smith may be ashamed of her fashion obsession, she still let Vogue into her dressing room, replete with vintage dresses, colorful head wraps, and a Venetian vanity.

Still, there’s something about the dangerous, too-sexy combo of fashion and writing—in particular women’s fashion and women’s writing—that tends to make people react in one of two ways. They either want to tidy the women up, safe-sex them, prop them like dolls, and sell to the highest bidder, much like Oprah’s recent Talbot’s ad of poets. Or they want to dismiss the fashionable women writers as frivolous accessories, unserious artists, like David Orr’s masculinist response to Oprah’s spread. These attitudes unfortunately often trickle down to the women writers themselves, who internalize this unconscious cultural sexism and feel bashful about their interest in fashion, or they compartmentalize their fashion from their writing in a Catholic sort of way.

To this I say: FUCK FASHION SHAME.

I cannot tell you how many female poets have told me that by encountering my work they now feel permission to wear hot pink lipstick and ball gowns to reading or conferences. I am glad they feel permitted, but I think it’s sad they ever felt there was something suspect about wearing lipstick and ball gowns to intellectual events. It’s my belief that my unwavering allegiance to glitter is the most radical stance in my career.

When Becca Klaver first contacted me about co-curating SEAM RIPPER, the title of her email was: REVENGE. In high school, Becca and I were both called into our respective principal’s offices for fashion crimes—hers, a slip dress from the Delia’s catalogue, mine, purple hair. Becca and I have been talking about fashion for awhile now—we really can’t stop talking about it—and we are both drawn toward the many brilliant women writers, such as the Gurlesque poets, who make fashion a part of their work. The thing about most of us fashion poets is that fashion’s been a part of our lives since we were teenagers, and yet, like many things teenage girls obsess over, the larger intellectual community rarely accepts fashion as a legitimate art form. And, if it is “embraced,” it’s misunderstood, as Oprah recently proved. Becca knew that Oprah had ripped off, and misunderstood, some of my work with fashion and poetry. So, like the two teen rebels we are, we decided it was time for a little payback from the Slip Dress Sluts.

Delirious Hem already speaks to fashion in its very title. What better space for a response to the intellectual community at large on women writers and fashion? And what better way to respond than to let these women speak and glitter and shimmy and bedeck and bedazzle for themselves? For that’s where Oprah and Orr made their biggest mistake—they put “fashion” on women, instead of realizing that fashion, like poetry, is something that comes from a woman, that she does by and for herself.

Not sure I agree with the assessment of Orr's response to Oprah. After all, he says (sarcastically): "Finally, it’s all too easy for Important Literary Folk to sneer at anything involving fashion. It’s so girly, you know, and real writers are never girl — ah. So the lingering gender biases of the literary world are often at play when readers cringe at the pairing of poetry with the stuff of women’s magazines." And then he directs our attention to the writing of one of the poets, Anna Moschovakis.

Maybe you could clarify?