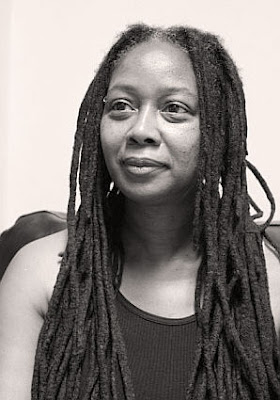 Rachel Levitsky is the author of Under the Sun (Futurepoem 2003), NEIGHBOR (UDP 2009) and the forthcoming novel,The Story of My Accident is Ours (Futurepoem 2011 or 2012). She is also the author of seven or eight chapbooks, most recently a prose work, Renoemos (Delete Press 2010). Levitsky teaches Writing and Literature at Pratt Institute, Naropa University’s Summer Writing Program, Poets House and Bard Prison Initiative. She is a member of Belladonna* Collaborative--a hub of feminist avant-garde literary action: www.belladonnaseries.org. Four of her mini-essays on Confinement can be found online: http://poetryproject.org/tag/rachel-levitsky. With Christian Hawkey and a bunch of their students, she recently opened The Office of Recuperative Poetics, a mobile installation of cultural recollection and reanimation.

Julian Talamantez Brolaski is the author of gowanus atropolis (Ugly Duckling Presse, 2011) and several chapbooks. Advice for Lovers is forthcoming from City Lights in spring 2012. Julian lives in Brooklyn where xe is an editor at Litmus Press and plays country music with Juan & the Pines (www.reverbnation.com/juanandthepines). New work is on the bloghermofwarsaw.

Lauren Nicole Nixon is a Brooklyn-based artist representative and poet. Nixon holds an M.A. in Arts Politics from NYU and a B.A. in Dance and Culture/Media Studies from The New School. Recent and forthcoming work is published in Bone Bouquet, The Tulane Review, apt, 491, Jelly Bucket, No, Dear and In Posse. She is a Pushcart Prize nominee.

Erik Freer is an undergraduate student at The New School in the dual degree program pursuing a BFA from Parsons the New School for Design in Communication Design and a BA from Eugene Lang College the New School for the Liberal Arts in Writing. At Parsons his focus is on Information, Print, and Typography and at Lang his focus is on Poetry and Play writing, with a minor in Japanese. Erik possesses a deep interest in ideas of mapping (or un-mapping) and the visual representation of information. Erik dedicates his spare time to any and everything cultural and creative he can produce and experience.

Kailey Foley is a poetry major in her third year at Lang. She resides and works in Bushwick, Brooklyn, which is often detrimental to her health if not instrumental to her writing. Her favorite poetry includes that of Charles Bukowski and the female Language poets. She spends most of her time composing 90's power-hour playlists and thinking about syntax. Kailey has had pieces published in Voice and Moth Mouth literary magazines and online at Spillway publications. Cool, whatever.

Karl Leone is a junior at Eugene Lang College of The New School and is honored to be taking part in this fall’s reading honoring his dear friend, mentor, and teacher Akilah Oliver. As an actor, Karl’s New York stage credits include “Marat/ Sade,” “Pride and Prejudice,” “Laramie Project,” and “Undermilkwood. 4 Recent film credits include “Keep the Lights On” dir. Ira Sachs and “Going Out” dir. Leah Samuel. Most recently, Karl has been concentrating on the genre of poetic drama and is developing a play called “Our Aporia” influenced on the writings of Oliver’s “A Toast in the House of Friends.”