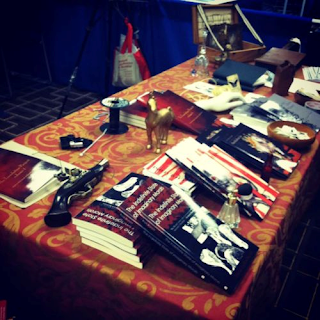 I'm thrilled to introduce the Women Publishers' Roundtable, a conversation with seven inspiring and innovative small press editors.  This feature will appear in several installments, each of which will include the editors' responses to a different interview question about the contemporary publishing landscape.  So without further ado...


Gina Abelkop (Pisces) swims in the river and lives with a pug (also Pisces) named after Ava Gardner. Her first book of poems, DarlingBeastlettes, came out in 2012 from Apostrophe Books, and recent work can be found or is forthcoming in Gigantic Sequins, Radioactive Moat, and Ghost Proposal.  She edits Birds of Lace Press and blogs here.


Lisa Marie Basile received her MFA from The New School in Manhattan. She is the author of Andalucia (Brothel Books) and Triste (Dancing Girl Press). Her forthcoming chapbook, war/lock, will be released by Hyacinth Girl Press in 2014. Her work can be seen in PANK, kill author, La Fovea, John Hopkin's Doctor TJEckleburg Review and elimae, among other reviews. She is the founding editor of Patasola Press, and an assistant editor for Fifth WednesdayJournal. She's also managing member of the Poetry Society of New York, which produces the Annual NYC Poetry Festival.


A writer and visual artist, Kristy Bowen is the author of several book, chapbook, and zine projects, including the forthcoming beautiul, sinister (Maverick Duck Press, 2013) and girl show (Black Lawrence, 2013). She lives in Chicago where she runs dancinggirl press & studio, devoted to paper-oriented arts and publishing work by women writers/artists.


KristinaMarie Darling is the author of twelve books, which include Melancholia (An Essay) (RavennaPress, 2012), Petrarchan (BlazeVOX Books, 2013), and (with Carol Guess) X Marks the Dress: A Registry (Gold Wake Press, forthcoming in 2014).  She edits Noctuary Press.


S. Whitney Holmes is the Executive Director and Editor of Switchback Books, as well as an editor for The Offending Adam. Her poems appear or are forthcoming in Poetry Northwest, Gulf Coast, Barrelhouse, and others. Her chapbook, Method of Loci, is available from dancing girl press. She lives in Chicago.


T.A. Noonan is the author of two full-length hybrid collections, The Bone Folders and Petticoat Government, as well as the chapbooks Dress the Stars, Darjeeling, and Balm. Her work has appeared in Ninth Letter, Verse Daily, RHINO, specs, Phoebe, Harpur Palate, and many others. She is the Associate Editor of Sundress Publications and oversees its Flaming Giblet Press imprint. Currently, she lives on Florida's Treasure Coast with her husband.


Erin Elizabeth Smith is the author of The Fear of Being Found (Three Candles Press 2008) and The Naming of Strays (Gold Wake Press 2011).  Her poems have appeared in numerous journals, including Mid-American, 32 Poems, Zone 3, Gargoyle, Tusculum Review, and Crab Orchard Review.  She teaches a bit of everything in the English Department at the University of Tennessee and serves as the managing editor of Sundress Publications, the Best of the Net Anthology, and Stirring.

First Interview Question:  What is your press's mission? When starting your press, why did that particular mission seem urgent to you?

Kristy Bowen:  The dancing girl series was initially an offshoot of wicked alice, the online journal of women-centered writing I had started in 2001. Since my educational background , both at the grad and undergrad level, had very much been centered around writing by women and the literary establishment’s historical gender imbalance, it was sort of an obvious route, to create something that explored those traditions and interests. In the intervening years, it’s become even more obvious that the gender imbalance, no matter how far things have come, is alive and kicking here in the contemporary lit world just as much as ever. So I think the mission has become more actually more urgent as time goes on.


S. Whitney Holmes:  SwitchbackBooks is a nonprofit feminist press publishing and promoting collections of poetry by women, including transsexual, transgender, genderqueer, and female-identified individuals. I must interject here that I did not start the press—Switchback Books was started by three ambitious and talented Founding Editors: Brandi Homan, Hanna Andrews, and Becca Klaver. That said, the urgency of our mission is in the numbers, as Kristy mentions. Women writers are consistently published and reviewed less frequently than men (sometimes only ¼ as often), and many major publishers’ catalogs only reflect 30% women writers. And this is despite the fact that we know most readers are women! That’s why it’s so important to me and to our Founding Editors that the mission says “publishing and promoting”—we aren’t really getting anywhere if we’re just “publishing.” We need to make sure that we’re providing as many readers as possible the opportunity to encounter the diverse voices our catalog has to offer. The most urgent part of our mission is getting these books into the hands of readers.


Gina Abelkop:  Birdsof Lace began in 2005 when I was lucky enough be in Amy Mattison’s feminist poetry class in which I was getting to read really smart, weird, funny, brutal and beautiful poems several times a week. It felt urgent, to make that kind of work available to whoever on earth may be able to find their way to it, needing it or wanting it or just fantasizing that it existed. Participating in the printing of literature that played, in some way, in the realm of fantasy. Work that does funny things to the brain, makes it behave differently, sometimes in tiny insistent ways and sometimes like a flower-rotted mallet to the head. The mission has remained the same: to print work by women and queers that drags your guts merrily through the sea, gives you flowers/takes them away, is generally playful and sly, generative. Birds of Lace likes vile, un-funny and thoughtful humor.


Lisa Marie Basile:  PatasolaPress began in early 2011 because I wanted to promote writing about identity. I knew female writers who deserved to be published, and I felt moved to take part in my small way. It had always been on my mind—I knew I wanted to promote women in the arts. When I saw VIDA’s Count, I wasn’t surprised, but I was saddened and angered. The urgency was also to create a place for writers to explore identity and location. I believe gender falls into these genres as well. We’re interested in publishing work that takes a deeper look at what it means to be who we are. We definitely want to publish emerging female poets as well. In traveling, I met so many women who were emerging poets and writers in the 2010-2011 years while starting my MFA at The New School, and when I met Rae Bryant, whose voice is, to me, feminist, unique and tremendously beautiful, I knew I wanted to start with publishing her book of short stories.


Erin Elizabeth Smith:  When I founded the press in 2000, there weren't nearly as many journals/presses on the internet as there are today, and very few of them focused on women-centric writing.  What I wanted to do with Sundress was to create a space that wasn't specifically “by women, for women,” but rather a press that had what I considered a feminine aesthetic.  Poetry that wasn't obsessed with solely the clever, but rather a mix of head and heart.  It was early 2000, and the writing world was still having a little bit of a Language Poetry hangover, and I felt that much of the poetry that I was reading seemed more interested in a Lynchian motif of cool rather than writing that made you hurt or wonder or spark.  I wanted Sundress to do something like that.


I think someone founds something literary (press, journal, anthology, etc etc), it's ultimately about creating a place that would publish their own stuff.  You don't edit an anthology of fairy tale poems if you don't have some Cinderella sonnets somewhere in your closet.  So maybe in some ways, I wanted a press like me.


Now, we still want those same things, but we also revel in publishing first books, publishing books by authors you don't know yet, by poets who are disenfranchised in some way, whether that's social class, gender, age, education, region, etc.  Those books that book contests forgot.


T.A. Noonan: I can’t speak to the early days of Sundress, but having been a part of the press (in one form or another) since 2006, I’ve seen the effort Sundress has made to publish and promote female writers. Like Kristy, Erin and I both found ourselves deeply invested in feminist and gender issues, writing by women, and the prioritization of male authors over female. The press, therefore, became a way for us to combat that imbalance. A lot of this work takes place in Stirring, the flagship journal of Sundress, and Kristy’s wicked alice. I think as we’ve gotten older (one hopes that means wiser and smarter, too) and technology has made it easier to publish more excellent work in print and online, we’ve had tremendous opportunity to do the work of righting the balance. Of course, that means a greater responsibility; the urgency is there because there are so few excuses.


Kristina Marie Darling:  I started Noctuary Press in the fall of 2012, and was definitely inspired by some of the other presses that are represented at the Women Publishers' Roundtable.  I imagined Noctuary as keeping a record of, and bringing visibility to, women's writing that takes place at the periphery of existing genre categories.  So much of the time, writing that's not easily categorized as "poetry," "fiction," or "nonfiction" is excluded from public discourse, and more often than not, the writing that's excluded is women's writing.   I wanted to offer a tangible public space for innovative women to work across genre categories, but also to interrogate these notions of genre, and to explore the gender politics inherent in these genre categories.  For me, this mission seemed especially urgent because there are so many presses publishing cross-genre work, yet much of this work is merely rebellious, and doesn't engage with the notion of genre in a meaningful way.  With that in mind, I saw Noctuary Press as filling a gap within the existing small press landscape.
* * *
Please check back for the next installment, which will include prizes, vispo, and fairy tell retellings...
Posted ∀ at 12:02 AM