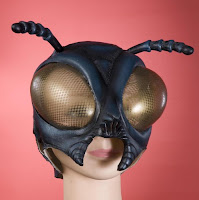 Going Rogue
(When I Heard the Song of What I See)
by Sarah Palin, Emily Dickinson, and Nicole Mauro
Then, a trap.

The black-suited, laptop-toting condom-wearing bananas who said they began as single-celled organisms that developed into monkeys who eventually swung from the trees came to me with stories, stories about duplicating creatures—mammoths with horns boinging not out of fjords, but beekers. On the continent of Iceland. Right in front of Scotland and the Chinese.

My face sliding off in the sunshine. Despite, the world vision of Cashmere I confidently see…

…the insects pass, but then they’re telling me that my pupils are small houseflies in the grass, and that these insects’ ancestors have always been trapped. In amberrock—like me. And then they’re telling me that the amberrock we’re all trapped in is from BC. And then they’re telling me that these insects in amberrock from BC are from what sprang my son Track. And you. And me. And then I said Nah, Earth’s bits of little blackness are just places where the whites of our eyes have rolled back. It’s like the condom has tightened, you see. It’s like there are two kinds of Summer’s Army—the one in California is a cluster of pansies, or scrub on the alluvial plane; the other in Fallujah is the one where bittervetch seed sticks to the buttstock of an M-16.

Same difference, I know. Both are situations—one is crunchy green, and the other a mass in Asia Minor flowergrow.

Sing with closed lips, migrant/soldier. Whose feet know the flat earth, despite its other eye, the round world—whose   bits come in bundles, in parcels, in blow-apart batches. Lest anybody spy the blood. There are not enough traps for the houseflies. Nor houses, for that matter.

Nicole Mauro’s poems and criticism have appeared in publications such as Jacket, How2, Western Humanities Review, and absent, among others. She is the author of six chapbooks, one full-length poetry collection, The Contortions (Dusie Books, 2009), and her second book, Tax-Dollar Super-Sonnet Featuring Sarah Palin as Poet, is forthcoming from Black Radish Books in 2011. She is the co-editor of an interdisciplinary book about sidewalks titled Intersection: Sidewalks and Public Space (with Marci Nelligan, ChainArts, 2008). She lives in the San Francisco bay area with her husband Patrick, and daughters Nina and Faye, where she teaches rhetoric and language at the University of San Francisco.
Posted ∀ at 3:49 PM