OUR STYLE: A Collage

I win Most Original Style, but I get it all from you.
The shock, the prank, the glamour.
The British spelling, the American, our own secret.
A freak & I learn how to use it.
How else would you know me in a square of blonde?
Four heads bobbing & bleaching.
I pick the box reads Wild Fire.
Rinse thoroughly, alternateen smirking
straight into the principal’s office.
He says wipe that lipstick off she says
is that underwear
or outerwear. She thinks she knows.
Later I’ll love
that word liminal. For now I ask to see the handbook.
Shimmy around
in the highlighted phrase, or otherwise distracting.
It’s an offering,
a tagline. A freak & I learn how to use it.
They make me rub
with toilet paper & soap or wear my gym clothes.
Too late,
I’ve already posed for the video yearbook.
My mom drops off
a cardigan. A lawyer, no time for frivolities.
She asks to see the handbook.
I learn how to promqueen, to pirate, to play
mermaid with just a smidge of
iridescence.
It isn’t costume, it’s myth. A way to bring inner to outer
& then go back in again.
Words do, too.
There were slanting avenues. Farwell, Melrose, Milwaukee.
If we went anywhere, there.
Mostly I just took what you gave me.
You gave me your makeup, your made-up words.
Your trailing vowels, your hand-me-downs.
We traded.
I confess, I never liked shopping. Bad lights, hot brain,
stranger yap yap yap.
You gave me an excuse. A surplus of good good goods
in the local economy
called BFF, in the barter-or-bribe stall called Sisters.
I asked you
what you remembered & you told me. Shirts, shoes, scripts.
You used
such great verbs. You told me—

The local bridal shop was having a huge sale to commemorate the royal nuptials, so I made a last-minute appointment and wouldn’t you know! I feel like it’s “our style” so I knew you’d approve. We shared a preppy J.Crew charcoal gray sweater during high school that you would wear over your vintages dresses in the wintertime. My grandma sweaters complimented your grandpa pants. Your side ponytail was pretty fresh. We share a love for side-ponytails at Packers games. Your painted jeans in 8th grade made me decide we needed to be friends. And then I tried to make you over into a hippie, and in your apartment in Milwaukee years later I realized that you are the real authentic hippie. In high school you wore slip dresses before I ever dreamed of becoming an exotic dancer. In high school plaid was super cool so I used to rummage around Dad’s closet to find shirts that were too small on him but not too big for me. After a while, I started grabbing his old t-shirts too. You and I always had diverging memories of who had which shirt first. Teen Wolf was the most coveted by you and we used to trade back and forth (though I’m sure you remember it differently). Ironic t-shirts were coming back but most of them were knock-offs: Cheap Chinese shit, as Dad would say. Small Is Beautiful was always a bit too small (“I can’t tell them apart but I know they’re stacked”). And who could forget Take a Chance on Romance—the shirt I coveted most, not only for the sing-song value but because it was about romance languages. We had to buy all our clothes from those resale shops while Dad put all his money into Ace Video and Jorgy’s. We always looked better with a cigarette pressed between our lips, or held like a cigar. I think we were more enamored with the style than the nicotine, at least for a while. I close my eyes and I see you in a short black nightgown in your LA apartment wearing platform sandals as slippers—I’ve never worn enormous flip-flops as house shoes, but I like to hang out late into the morning hours in pajamas, and every time I do I think of/pretend to be you. The blue velcro tennis shoes you eventually made your own after they didn’t fit in my move-and-fit-everything-in-two-suitcases first trip to Holland. Our hands are the same but our feet are different so now it just makes me happy to see you wear them. Fingernail painting and blue platform shoes. Fingerpainting with fresh ground pepper on New Year’s Eve. Of course we have handwriting and voices in common, and I am not talking about our “language” which is a combination of Heather’s “native” valley girl and strawkerrrs, but our schizo voices. My handwriting has never been as beautiful as yours, but I remember in high school thinking that if I used a gel tip pen, or held my pencil like so, or if I drew tiny drawings below my thumbnail, I’d have pretty handwriting like you, or maybe even pass a history exam. Bee chasing and sick-note writings at a picnic table outside school with great mom-handwriting flourish. It coulda been a cottage industry. I think we all learned to type on AOL IM. At least I did. What I’m getting at: I have ripped off your style—down to the nubby tights and the obsessive application of lip product. Getting back to the wedding gown. I was seized by a sudden and Becca-esque desire to “go big or why bother.”
—The bigger the better the tighter the sweater, the girls
depend on us. Frilly, frivolous, indulgent, impossible,
over-the-top, to feel physically as if the top of my head
were taken off. Frou-Frou print on the easel when you
first walk into our shared apartment, Los Angeles, 2001.
You gift me things pink fuzzy & aglimmer, you mail me
a swirly red dress, rubber stamp with my name on it.
Just today you send two unicorns charging on yellow,
KNOCK YOU OUT. You stare at my shirt & ask if you
gave it to me. No, we each bought it separately at our
favorite store back home. (O Moxy, sayonara, adieu.)
I go back to LA seven years later & what I really want
to see is your shoes. I take a picture & post it online.
You break your neck & I buy us the same blue velvet
scarf, think it’s kind of a shame we don’t have the same
neck brace. Screenwriters want to know why I’m so
short, where are my platforms. In some cities, we walk.
In some cities we carry. Alls I need’s traction & access
to other people’s closets. Now we live far away, only see
slivers of wardrobes. Now we live close enough to share.
No, I will not bring my own shampoo: I wanna smell like
you. I like when old stuff hands off, buffs up, turns new.
*** 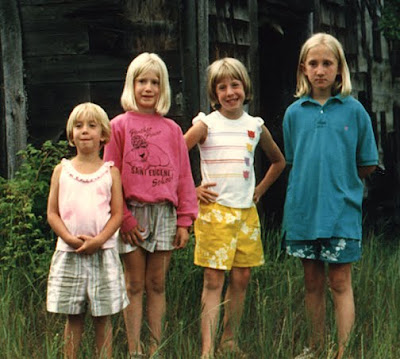 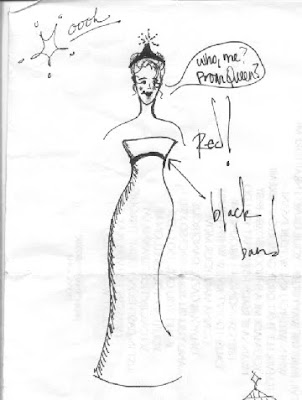 Scan of original map of my plot to become prom queen. 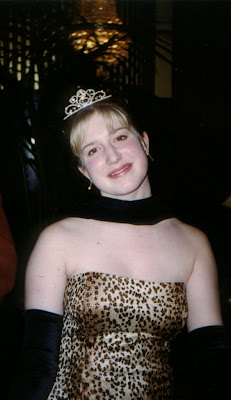 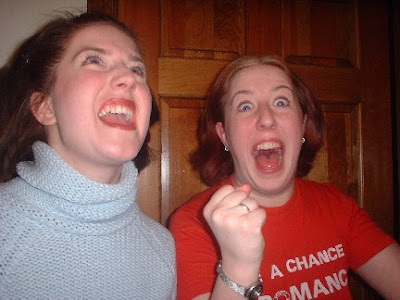 Me in my black-haired "Snow White" phase (left) and my sister Annie wearing Take a Chance on Romance, a t-shirt mentioned in "OUR STYLE." 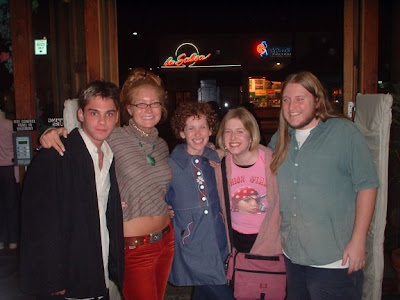 Me and my high school BFFs (L to R: Jeff, Jenny, Heather, me, Austin), who contributed to this piece, in Los Angeles, circa 2001. 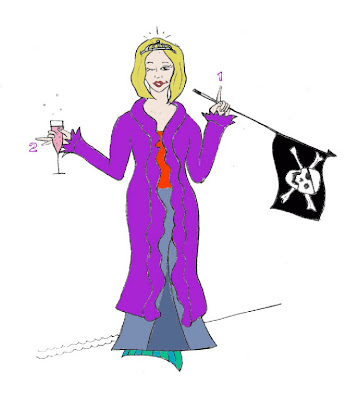 Self-portrait from hand-drawn invitation to my 21st birthday party. 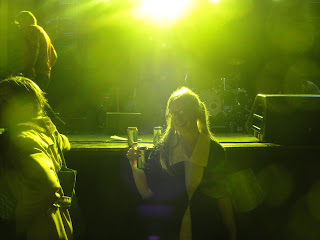 My current Facebook profile pic: me after the Destroyer show at Webster Hall, April 3, 2011.
Bio: Becca Klaver is the author of the poetry collection LA Liminal (Kore Press, 2010) and the chapbook Inside a Red Corvette: A 90s Mix Tape (greying ghost, 2009). She attended the University of Southern California (BA) and Columbia College Chicago (MFA), and is now a PhD student in English at Rutgers University. A founding editor, with Hanna Andrews and Brandi Homan, of the feminist poetry press Switchback Books, she is also editing, with Arielle Greenberg, Glow in the Dark, an anthology of poems for teenage girls. Born and raised in Milwaukee, WI, she now lives in Brooklyn, NY.
Posted ∀ at 10:03 PM