The babysitter lived across the street from me.
I wasn’t more than four.
It was his mouth I felt there.
I cried.
I told my parents and they filed a restraining order.
His name was Jordan.
I said it sounded like the word drawer because you keep secrets in a drawer.
He was an adopted crack baby.
It made me look at him with a little more compassion,
because I had to look at him for another eleven years.
When I played in the front yard with my brother.
When I came home from school and his eyes followed me inside.

I don’t know why I agreed to meet a man from chat room
I was talking to after I had studied Plato,
or written a poem in response to Adrienne Rich
for my first ever poetry workshop’s final portfolio,
or whatever good girls at a Jesuit university should do
at the end of their freshman year.
My friend drove me to a bar in Torrance.
She wanted to give me a knife, but I could handle myself.
I was eighteen and nobody carded me.
I don’t remember what I drank or when it was roofied.
I remember there were pool tables.
Then his house.
Then him pulling me on top of him and expecting me to
know what to do with my drugged body.
Then him dropping me home.
I didn’t allow myself to be touched for over a year.

I tell a male friend of mine I was almost raped in a San Francisco hotel room
by a friend of a friend I didn’t so much as say hello to,
who starts undressing me as my friend slept beside me,
tells me to follow him into the bathroom so we can finish this.
I shove him off me and sit up all night keeping watch
because BART doesn’t run at 3:30 in the morning.

I haven’t had sex in three years.
It reminds me of the fiancé who kicked me and slammed
his fist on my chest when I found
images of women tied up and beaten bloody
in his browser history.

My friend says it’s best not to share hotel rooms with strangers.
Now he posts on Facebook about rape culture. 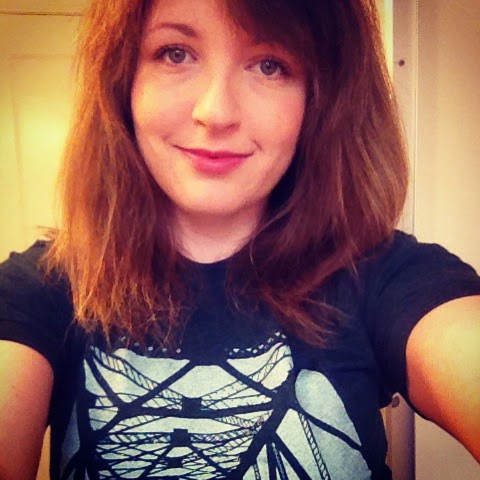 CARLEEN TIBBETTS  is the author of the e-chapbook a starving music will come to eat the body (FiveQuarterly, 2014). Her work has appeared or is forthcoming in Coconut, H_NGM_N, Sink, inter|rupture, Dusie, Jellyfish, Thrush, Ilk, Fact-Simile, The Laurel Review, and other journals.

Curatorial note: The following poems are a response to a call for poetry about rape culture for the annual Delirious Advent Feature; the call is in turn an immediate response to the Rolling Stone story “A Rape on Campus” about rape culture at the University of Virginia. However, they are also part of a larger conversation about rape in poetry communities. Curated by Jessica Smith and Susana Gardner.
Posted ∀ at 10:09 AM