I think he was pretending I was his old girlfriend.
We were in the back of his van parked in a driveway.
After he was done he said, “Goodnight, Pumpkin.”
We’d been introduced by the husband of my old professor

(he worked for the husband doing something or other).
It was summer 1982; he’d just broken up his with his girlfriend,
and we went to a party where two guys with greaser hair pissed him off.
“They should stay in their own era,” he said, as he stormed out.
I recalled the husband telling me he’d called his old girlfriend “Pumpkin.”
Then we were in the van, heading north, not south.
He didn’t say anything; I was to understand he was still pissed off.
When he got on the expressway I started wishing I were someone else,
someone who would rightfully object when he said,
“I’m not takin’ you back to your nigger neighborhood at this hour,
Pumpkin, so just relax and don’t worry ‘bout nothin’,”
someone who would’ve jumped out and run, and not stayed there,
in the back of the van, breathing her own breath back all night.
It occurred to me later he was pretending I was his old girlfriend,
because after he was done he said, “Goodnight, Pumpkin.” 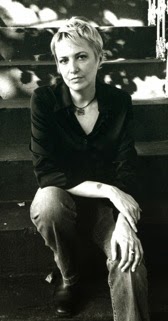 SHARON MESMER's most recent poetry collections are The Virgin Formica (Hanging Loose) and Annoying Diabetic Bitch (Combo Books).  Four poems appear in Postmodern American Poetry—A Norton Anthology (second edition).  Her fiction collections are In Ordinary Time and The Empty Quarter (Hanging Loose) and Ma Vie à Yonago (Hachette, in French translation). She teaches at NYU, the New School, and online for the Chicago School of Poetics. A new poetry collection is forthcoming from Bloof in 2015.

Curatorial note: The following poems are a response to a call for poetry about
rape culture for the annual Delirious Advent Feature; the call is in turn an
immediate response to the Rolling Stone story “A Rape on Campus” about rape
culture at the University of Virginia. However, they are also part of a larger
conversation about rape in poetry communities. Curated by Jessica Smith and
Susana Gardner.
Posted ∀ at 7:40 AM