How I Learned Feminism Wasn’t for Me, and Then Learned Better by Mary Biddinger 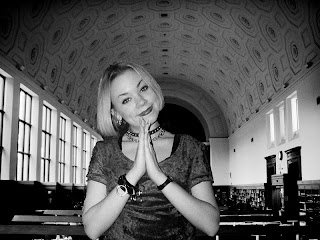 Mary Biddinger used to be a nineteen-year-old undergraduate from the Midwest. She is now the author of Prairie Fever (Steel Toe Books, 2007). Her work has appeared or is forthcoming in Copper Nickel, Crazyhorse, Gulf Coast, The Iowa Review, The Laurel Review, North American Review, Ninth Letter, Ploughshares, Third Coast, Passages North, and many other journals. She is the editor of the Akron Series in Poetry, and Co-Editor-in-Chief of the independent literary magazine Barn Owl Review. She teaches at the University of Akron and is the new director of the NEOMFA. She blogs at The Word Cage.


Begin with a nineteen-year-old undergraduate from the Midwest. Shave half her head. Slip with the clippers and shave more of her head. Make her hair a screeching faux platinum blonde. Put a tube of black lipstick in her hand. Watch her peer into the reflective side window of a Trans Am and glide the lipstick on. She can make a cat-eye flip with liquid eyeliner, but today she isn’t wearing any. Stand her on the stairs of the library. Not the eyesore undergraduate one, but the graduate library. She always liked that library best. Back up. Look her over. She’s wearing combat boots from the surplus store. That’s not her daddy’s flannel. It’s 1993. Her headphones are enormous by today’s standards, but nothing’s weighing her down. She feels entitled to her place on these steps. She’d lie down on them if she could, and sleep.

Flash back ten years, and she is wrestling the neighborhood boys on a patch of burned Chicago grass. Put all of the hair back on her head. Replace those combat boots with Mary Janes. Add to the scene a feminist mother, only twenty years her daughter’s senior. The girl and her mother drink plenty of Tab cola, but they don’t eat California grapes. Add to the scene a Catholic school uniform. The girl and her mother pray for a woman priest some day. Out of frame, there’s a father who travels. The girl has a talent for replacing fuses when he’s gone. A house just like all the other brick houses on the block. Knee socks that never stay up. A sense of being able to do anything, but the luxury of not having to worry about doing anything just yet.

Return to the nineteen-year-old undergraduate from the Midwest. She sits in the front row of the classroom. She signed up for this class because she knew it would be for her. Or, because she had something to say. Or, because her university was known for the subject. Or, to fill a requirement. She did the reading last night, even purchased the recommended copy of Our Bodies, Ourselves, which she was too squeamish to add to her bookshelf, but will nonetheless find rather useful later in life. She does not own a CHOICE t-shirt like some of her classmates, and back at home there are brochures of shattered fetuses under her bed. She never had the desire to pass them out to friends, but felt strange throwing them away. Under the bed there’s also a Hershey bar that someone gave to her, and that she never bothered to eat. When a classmate brings an RU-486 pill to class one day, she gazes at it like a neon pebble.

Return to the nineteen-year-old undergraduate from the Midwest. This year she’ll skip Take Back the Night. Instead, she’ll run around campus with three different knives in her jacket, hoping to bring her own brand of vigilante justice to the town serial rapist. She’ll never take another Women’s Studies class again, instead deciding to write poems. She’ll go to graduate school and make jokes about feminist theory. Oh heavens to Betsy! He’s objectifying her, and she’s internalizing it! She’ll get in fistfights in nightclubs and win. She’ll write poems about getting in fistfights in nightclubs and winning. She’ll become a mother, and a professor, and a mother again. She’ll teach a Women Writers lit course and it will all come back to her when writing her syllabus. She promises a class that won’t bash men. A class that never doubts the necessity of undergarments, where women can show up in wigs and fake eyelashes and body glitter, and men can, too, if they wish. But on the first day when a freshman student mentions that she’s not a feminist, and what the heck’s up with feminism anyway, the no-longer-nineteen-year-old will bristle.

Go back to 1993, and the front row of the classroom. The teaching assistant is asking if there are any questions. The nineteen-year-old undergraduate is contemplating the RU-486 pill, wondering how it would look if mounted inside a crystal and hung from a chain around her neck. Would it be a feminist statement, or would she be submitting to the patriarchy yet again? The teaching assistant is still asking if there are any questions. The nineteen-year-old undergraduate holds on to the RU-486 pill, mesmerized by its glossy finish. Does she begin to feel cramps, as if merely touching the pill has inspired her own uterus to protest, or at least to demand a double quarter pounder with cheese? Does her hand dart up, or does she leap to her combat boot feet and pump her fist in the air, demanding an apology?

No. The nineteen-year-old undergraduate rifles around in her backpack and produces a tube of black lipstick. She wishes that the RU-486 pill could double as a mirror, but instead decides to wing it. She drags the lipstick across her bottom lip, then merges the bottom lip with the top. She contemplates blowing the teaching assistant a kiss, but thinks better of it. Twenty minutes later she’ll be climbing the steps of the graduate library. She feels entitled to her place on those steps. She’d lie down on them if she could, and sleep.
Posted ∀ at 2:45 AM

Mary Biddinger, I love you:) This is a great post. I absolutely HATE when people try to define such a narrow, EXclusive feminism.

Love, Heidi, whose legs are hairy-soft but whose eyebrows are plucked to perfection.

Your essay does one thing I did -- take the question "What does a feminist poet look like?" very literally (that one makes sense to me; since the culture is so obsessed with the surfaces of femininity, the feminist has to pay special attention to them).

It also does one thing I started to do and then changed: referring to one's younger self in the third person. I'm not sure why I started out that way, and I'm curious about that impulse.... what made you choose third person?

I guess you could say my questions/comments are "style-related."