This is what a [post]feminist [poet] looks like. by Gina Myers 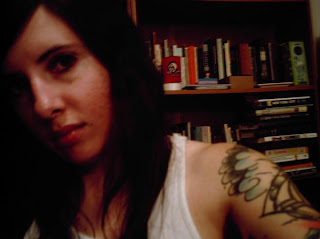 Gina Myers lives in Saginaw, MI, where she edits Lame House Press and works as the Reviews Editor for H_NGM_N. Her first full length collection, A Model Year, will be released by Coconut Books in July 2009. She contributes reviews and articles regularly to BookSlut and
Review Magazine, among other places.

When Danielle sent out the call for women poets to write about their relationship to feminism, I had just finished co-directing The Vagina Monologues at a conservative community college in a small midwestern town. I had left the safe-haven of New York City and The New School to return to the place of my childhood, a place where people manufacture cars and vote democrat because the union tells them to, but a place where most people seem to have very traditional and conservative family values. I found myself fighting a fight I foolishly didn't think still existed. So when I read Danielle's message, it seemed like the perfect time to ask myself, what is my relationship with feminism? Here is my response:


My body is something I take with me everywhere I go. I have been called post-feminist, post-avant, post-punk, and post-modern. My heroes include Joe Strummer, Nina Simone, and James Baldwin. I identify as being human before I identify as being a woman, and that shapes everything I do.

I learned about inequalities and injustices early in life. My parents, both social workers, would come home with stories of abused children, and I became aware of how different (and privileged) my life was from others. The city I grew up in suffers from horrible poverty, and you can see inequalities in wealth distribution by looking at the public schools and seeing who has funding and who does not. Furthermore, my city is segregated and rife with violence--domestic, sexual, gang, random, and otherwise.

Even though I always had a strong sense of how I felt about things, it was not until I was an undergraduate at Central Michigan University that I became an activist. There I organized the Take Back the Night march and was a member of Empowering Women Everywhere. I was also a member of Advocate's for Labor Equality, and I took part in many demonstrations and marches against the war and read at our local Poets Against the War event. I was vegetarian and enjoyed the free vegan meal lunch program at the Wesleyan Foundation on campus where there was also a free community garden. Our group of activists organized around GreenTree, the food co-op, University Cup, a coffee shop, and The Bird, a bar. We had resistance training, learning what to do when you're being arrested, and we hosted teach-ins and attended lectures on revolutions and struggles in faraway places. The Michigan Green Party was active on campus and student members started their own alternative paper. The topics in the paper ranged from violence against women, Michigan water rights, the need for a living wage, and international struggles. I did not see one cause as being more important than others, nor did I necessarily see them as being separate causes. The larger issue is social justice, and I have continued to live my life committed to this one cause.

Although I see these various struggles as being one cause, it does not mean I can address them all at once. Perhaps it is a commitment issue, but I devote my attention to whatever cause seems most urgent at the time. Recently, I have witnessed misogyny, sexism, and violence against women and the LGBT community of students at the school I teach at and in the surrounding communities. When working on a week worth of activities--teach-ins, films, panel discussions, and performances of The Vagina Monologues--benefiting three local shelters, I was shocked time and time again by the reactions of people and the various forms of resistance we met from administrators, faculty members, and students. I had never felt so baffled. It became clear that this fight is urgent here.

I started to make a short list of women poets who have been important to me, but in no time at all that short list became a long one: Fanny Howe, Eileen Myles, Maggie Nelson, Adrienne Rich, Bernadette Mayer, Barbara Guest, and Alice Notley are just a few. I just finished reading A Human Eye: Essays on Art in Society by Rich, and throughout the collection she hits time and time again on what it means to be a humanist. The collection, overwhelmingly, is reaffirming and inspiring as Rich takes a global worldview and reiterates the importance for social justice. Other names on my list: Lorraine Niedecker, Muriel Rukeyser, Nelly Sachs, Anne Carson, Kate Greenstreet, and Anne Boyer. Male poets have also been very important to me: Paul Celan, George Oppen, Robert Creeley, James Schuyler, Ted Berrigan, David Shapiro, Joseph Lease, Peter Gizzi. This is the first time I have ever thought about my favorite poets and divided them along gender lines. A poet is a poet is a poet.

So how does this all relate to my own writing? Aside from my most recent chapbook, Behind the R, social justice and politics are largely in the background of my poems. I like to think most of my work is about the human experience, though I would never claim that experience to be universal. My poems are often about failure, though I am much more optimistic in real life. If
I did not believe in people, in the human spirit, in the possibility of a better world, I would not be able to go on. So I go on.
Posted ∀ at 1:39 AM

Thanks for reminding everyone that the goal of feminism is to arrive at humanism. So important, but so easy to lose sight of when the end of the battle seems a long way off. I think we need things like what Megan called "strategic essentialism" -- thinking of ourselves as women in a group, e.g. feminist poets -- to get to humanism, but the end goal should be folded in.

It's an important wake-up call for people who think they're *not* feminists, too. (My usual, simple question for these people is, "Do you think men and women should be treated equally?" and when they answer "Yes, of course," then I say, "Well then you're a feminist." I'm not sure they're convinced!)