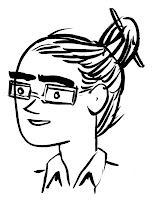 Kate Schapira is the author of TOWN (Factory School, Heretical Texts, 2010) and several chapbooks with Flying Guillotine Press, Portable Press at Yo-Yo Labs, Cy Gist Press, Rope-A-Dope Press and horse less press, as well as her own kitchen-table imprint, In Hand Books. She lives in Providence, RI, where she teaches at Brown, the University of Rhode Island, and the Smith Hill Community Library, and runs the Publicly Complex reading series.

I think many people associate being easily swayed or open to convincing with women, with femininity, and also believe it to be bad, although I’m not sure which came first. I feel like those are the places where learning can happen. I think sometimes when you are too sure, too pure, you keep thinking exactly what you thought and doing exactly what you did, and I don’t think there is any set of thoughts or actions so perfect that it should never change. I’ve called myself a feminist since I learned (from my mom) what the word meant, but what I think I need to do about that—what I want my actions to be because of that—has changed and continues to change.

Right now I’m thinking I have had a lot of turns to speak and it’s probably my turn to listen. In being a feminist I put myself in the position of not wanting this world, but when we start to describe what we do want, the world we want, it may not turn out to be all the same world.

Taking turns, making room: I feel like there always needs to be more of this. Look how much I’m saying, “I think,” and “I feel.” In some ways this making room is tricky in poetry because it’s words, it’s about speaking! How do I make room in my own voice for other voices? (“Other” in this case meaning “people besides me.”) I just finished a semi-collaborative book, TOWN (Factory School, Heretical Texts, 2010! Yeah!) in which I asked about 100 people to tell me about a town and wrote poems in which everything they told me was true. I’m currently working on a project that includes words from soldiers’ blogs as part of talking about the way humans try to make each other into heroes and monsters. In some ways this is sort of cake-eating and cake-having: I am listening, but I also get to speak (through presenting and commenting). I simultaneously feel like it’s moving closer to what I dream of, and wonder what else I will have to, choose to, be able to give up.

Feminist web presences—including, most recently, the great blog FWD (feminists with disabilities) For a Way Forward that someone referenced in the comments to Jennifer Bartlett’s post—as well as poems and writings by (among others) Joan Retallack, Harryette Mullen, Leslie Scalapino, Brenda Iijima, Ann Lauterbach, my associated Kates Greenstreet, Colby and Pringle—so many others and really, mainly women—have informed my use of words, including my own poems, the metaphors I use, how I talk to my friends, what I assume. I teach writing too, and I try to bring up with my students the reverberations into action of the language they use. It’s not about policing but about believing people—that people know what they want and mean what they say. I don’t want to be the permanent boss of anyone.

If you try to define being a woman in a positive way—not positive as opposed to sad but positive as opposed to “not a man”—you run into all these essentializing or exclusionary things, like bumper stickers or parking passes. Many of the things that as a feminist I want for women I want for people of all genders—many or all of us (humans, living creatures) lack them. Maybe instead of saying “I think” or “I feel” so much I, or we, could start saying “I want”?

Poetry helps me pay more attention to the words I use inside and outside of it and what they mean for whom.

My characters Freak Millways and Tango Wax are young gender-free lovers and performers, who are beautiful to me because of their narrowness, which is also their immediacy. They’re very local, very caught up in what’s happening around them. This is something that I think of in both feminism and poetry, the range of words and actions: if I try to get a student to examine the assumptions in something xe said, how far does that action reach? If I yell at a guy who catcalls another woman in the street? If I write a series of poems that asks questions about seeing women’s bodies as pathological? If I donate to Planned Parenthood, or use their email form to write to my senator about the Stupak-Pitts Amendment? I feel like feminism is about remembering that women are real, that all people are equally real, and the more local you are, the easier it is to keep realness in mind.

In the form of feminism I would like to practice in writing and life, people—women—would take turns saying what they want and listening, would take turns committing to meeting the wants and needs of the people speaking. This would require speakers and listeners to be honest—if you have been a turn-taker, then be a turn-giver for a while and vice versa. Acknowledging how much or how little you have already said, how much or how little you’ve already listened, and evaluating it in the context of everyone who is not you, and then deciding whether to speak or to listen—then to commit to action—can be kind of awful either way, embarrassing and risky. I don’t think this is a dreamy-happy-fake-utopian version of things. I think it could give us change without coercion. I think it would require us to listen to ourselves and each other (by “us” I mean “people of varying degrees of privilege”). When poetry’s working best for me that’s what it does. I try to require it of myself. The poems I value require it of me.

Many people are doing this already—but I would like now to ask people to respond in the comments with what they want to say, what they want to have heard, what they want. If you’ve said it elsewhere, you could just say where to find it. If you feel like you too have been a turn-taker, maybe listen a while.
Posted ∀ at 1:40 AM

Instead of saying "I want," a lot of feminists will use the the collective "we want." The collective identity. I think that's definitely another component to feminism, this idea that it's a shared struggle.

I would love to read "a series of poems that asks questions about seeing women's bodies as pathological." Why not? That's also a collective struggle -- the perception of a hysterical female, a victim of her body. Hysteria meaning uterus in Greek, I think. Doctors seem to have this perception a lot. At least that has been my experience, being a patient with multiple health problems which I blog regularly about.

There are a lot of us women out there blogging about our health. It's cathartic and empowering. And when people comment, the narrative keeps going. I think this support is my favourite aspect of feminism, especially when people start supporting things they hadn't even thought about until reading my entries.

loveable_homebody, if you have a PO box, I would love to send you the chapbook that some of those poems are in. (For free, for free.)

No PO box? If you care to, you could email me your actual address: kate_schapira AT brown DOT edu.

I have other things to say re: "I want/we want" but there's the whole turn-taking thing.

Oh yes, I'd love to read what you have to say about "I want/we want."