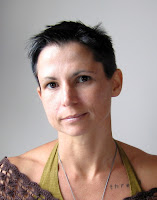 Kirsten Kaschock is the author of Unfathoms (Slope Editions) and a beautiful name/for a girl (upcoming from Ahsahta Press). She holds a Ph.D. from University of Georgia in English and is currently a doctoral fellow in dance at Temple University. She lives and writes inPhiladelphia.

I don’t like them. Ever confessing boredom, vampires have no inner resources. They deign to still be interested in sex only marginally—or else, in extremis. In my memory, only in The Hunger did I watch vampires who had become musicians. Who spent some of their time on pursuits that put their stolen blood to use. Time is borrowed from death for most of us—for vampires it is stolen from the living, yet they are not grateful. Vampires, despite their European or Egyptian pedigrees, are quintessentially American. Ever youthful, ever beautiful, ever vicious—ever living in the privilege. Where is the vampire scholar? The vampiric philanthropist or scientist? Vampires are the pale idea that we do not learn, that we do not grow, that to live forever is only to go around again and again and again. I am a feminist because I am the anti-vampire.

My first conscious act as a feminist was a refusal: I would not take my husband’s name, would not be possessed. This was the third grade, and the husband and children were givens, but somehow the name was ridiculous. If, as I knew, men and women were exactly equal, if different—then to change my call-sign for a boy was simply an outdated idea, and wrong. This was also how my ex-Catholic parents taught me to think about religion. It helped that I didn’t much like other people’s families, that I didn’t want to leave mine to cleave to anyone else’s. Truly, my logic on this issue was deeply conservative: relinquishing my surname offended my very warped concept of fairness—also, I didn’t feel like embracing change. I could be both married and Kaschock. Why not?

I cut my hair pixie-short soon after this decision. This, I did with my father one summer afternoon and it earned me a year and a half of derision from an insane ballet teacher—until it grew back to bun-length. I didn’t quit ballet, but I was from this point on deeply ambivalent about it. I love it now, still take classes, also ambivalently. I snapped my Achilles two years ago in a dance class while trying to fly. At thirty-seven, the recovery has been slower than I would like, but ballet classes help. Two of my three sons are enrolled in dance, doing their first pliés and tendus—in the same traditional black tights, white shoes and t-shirts my brothers wore from ages five to twenty-five in their classes. If my boys stay enrolled, their best friends may very well be young women. A gift I would like to give them. Ballet, that most feminine and self-image-damaging of endeavors, is both much more than that and not quite that at all, engaged in deeply.

Vampires are unused potential. They are the manifestation of the extra-hour-in-the-day that is lacking for the weary. Why are none of them artists? Community activists? I know that small time is not an obstacle to accomplishment. This is a myth that harms those who must, in their non-extended lives, perform many roles. Or simply want to. The lack of time does not prevent art, but believing that it does invites artistic paralysis. The belief that there is a single recipe for beauty, for art-making, for governance, for social organization, for what a family is, for what it means to read a book or be a woman—this is the blood-drainer. Total immersion and time given to one area of interest: this is the anorexic myth of greatness. I refuse it based on my knowledge of vampires. If time devoted to singular passion were the measure—to be a person of note would be to be a long-lived if not deathless hermit with a cache of stingy materials. In actuality, this is only one path.

I didn’t have a theory of feminism when I was a teenager. And I don’t. I love theory—I read it for fun and profit. Well, I read it. I claimed my feminisms despite ignorance: I was a feminist in college when Rush Limbaugh convinced my father to refer to me as a femi-nazi (rough period for Dad… now he says he was listening to Rush “ironically”). But Yale was deeply conservative and my education there (I was not really a self-director) consisted of reading great books by great men (I say now, ironical as my father), the occasional Elizabeth Bishop poem, and then, senior year—Virginia Woolf—who wasn’t (it was clear—wasn’t it?) as smart as Joyce. I liked Woolf better and felt less smart. I liked how her arguments looped around each other. I liked how they tripped me up with digressions and tangents that were actually central, if you took the time to follow her circuitry. She didn’t edit her electric excess, she hooked it back in. And so, for me, there was more power to her.

Vampires produce each other on purpose—acts of animal magnetism, ownership, and punishment. Since they view their life as a privileged sort of hell, those whom they elect to join them are both being elevated and tortured. They choose their own chosen. They are both gods and servants, the made and makers. In a strange way, there is no mystery since there is no recombination—only a sort-of blood purchase. There is little accident to increase in the vampire community, and there is much homogeneity. Humanity is the clay they fashion themselves and each other from, but it is the physical form and attraction to it in vampire literature that serves as the primary evaluative criteria. To recreate oneself so calculatedly, with swap of blood but no crossing of minds—no allowance for the bloom of the wholly new from out of the detritus—is to deny meaningful growth. In extending themselves and their image, vampires do not go deep, do not surrender themselves to the fullness of their creations, they make instead copies.

I kept going to school. I moved to New York after my undergraduate BA in English and temped while I took dance classes. But I wanted to choreograph—not to audition where bodies were targets of evaluation as often as the dancing—so I ended up in Iowa City, working on an MFA in choreography. That’s where I met Danny, budding future geneticist and his huge Midwestern Italian-American family. I was at the time purposefully bald. We moved quickly back East. In pursuit of my sanity and his doctorate. I got accidently pregnant and, thinking dance (so body-bound) was over, started writing poetry again—the terror of failing the great-books by great-men test having worn off a bit. I had Simon, started an MFA in poetry, wrote a book, had a second child, Bishop. We applied to Danny’s post-doc and my doctorate in English together. Emory took him, UGA took me. Another superb accident: we named him Koen. After the deep south, we moved to Philadelphia for a job—Danny’s. I did the adjunct thing around town before beginning a doctorate in dance on a fellowship that pays far better than adjuncting. Far better.

I view all my institutions as having offered patronage to a dilettante. I can’t refuse that label. I can’t refuse any label thrust at me so violently. I look at the facts as given above and know some would say (some have said) I have chosen to capitulate, to hand my head over as I procreated. But I kept my head, and chose to spend the years with my young children feeding it. During these years, I have written four manuscripts (3 poetic, 1 fiction), and I have read those female writers and studied the work of those female choreographers I was not exposed to earlier in my education. I choreographed and began dancing again. But I have also begun to understand what my early feminisms did for me. They made me able to keep going, to refuse the necessity of choosing any one thing over another, to keep gathering labels and identities as they came without discarding any. I am scholar, poet, choreographer, mother, dancer, daughter, lover, friend. I did not give up my humanity, once bitten, twice bitten, thrice.

My feminisms allowed me to go into my several inseparable interests deeply over time, rather than pick one for total immersion. I can’t devote twelve hours a day to writing, or to dance, or to my children, or to eating or sex, or to hunting for blood. But I never could. Even if only one of those interested me, twelve hours is too long—as would be eternity—I admit it. My feminisms have slowly allowed me to become okay with my sprawling finitude.

I want to raise feminists. My boys are, I hope, on their way. They are themselves, and I am encouraging them to accrue identities rather than eschew any. They are also learning who I am—which is key to my project for them since I have failed (more accurately, genetically, their father’s sperm has failed) to produce for them a sister to love and to witness in the fullness of her multiplicities. I would like to be a cognitive neuroscientist, a cellist, a linguist, an architect. I would like to adopt more children, or to foster them—this I may still do. The interesting thing about the label mother is that, like writer, it encompasses several others: cook, confidante, nurse, coach, lullabyist, protector, mentor, and disciplinarian among them. I didn’t know when I first became pregnant that the one role I was wary of accepting because I thought it might limit my feminisms would actually be the one role that would most expand them. That has been a surprise. I look like a feminist because I now look for opportunities to be surprised and to surprise myself and others. To engage in the expected so deeply, so broadly, that it is both much more and not quite at all what I once thought it to be.

I seek to embrace other feminisms as I encounter them, to be moved and changed by how other choices and other refusals and other engagements have created humans invested in the expansion of human possibility rather than in its narrowing, or in the dismissal of such engagement as cliché. I am not a vampire—life does not bore me. I am a feminist because I know I will die, and I want to get somewhere, and I want the world to get somewhere else, before I do.