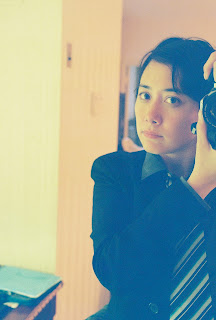 Across the street a beautiful asian was burning. I took my sandals off. Seven times hotter the fire remembered babies. And canals of babies burning it back. I took off your sandals, and your sandals, too. Sometimes we waited for stone tablets. Most often we brewed what tea we could of the desert. Silicate, mica, a mysterious formica. We drank and became practiced. We missed our mothers. Our mothers couldn’t call. We called in dreams. We dreamed illnesses on our new bodies. The bodies clung to covenants. The covenants, in turn, drove to scholarship. (Stewardship, pharmacists like to say. Star Connection, my Tanenbaum makes to say.) So many babies, the asian said. Across the street a beautiful iconoclast was burning. I do remember that dream more than all—that I did not doubt. Your honor, I saw the future.
—Sarah Gambito, Matadora


Although all of Sarah Gambito’s Matadora means a lot to me, it is like one of those albums that becomes important to you because there is this one song you find on that album to replay again and again during crucial moments in your life.

At the time I read "Paloma’s Church in America," I had not read much from Asian-American poets that I felt spoke to me. Or that I felt were engaging in a dialogue with Asian-American experience. Oftentimes there were poets or writers engaging in a dialogue, but with an experience I could not claim, and I felt isolated from the work, a fraud. As an Asian-American poet that comes from a mixed identity, it is easy to feel a fraud, easy to feel that most experiences, culturally speaking, are quite without reach. When I first started toying with the idea of photography, I first wanted to do this project of the broken, barren things of our world. A shot of an abandoned mattress on the sidewalk for example, when taken at a certain angle, at a certain close-up, could call many associations. I wanted to take that shot of the mattress at such an angle or perspective, that it’d really be up to the viewer and the viewer’s world what the photo was turned into. Perhaps a rock. A favorite striped shirt of an old lover. A tattered rope. It is clear to me now that this project and my imaginings of it were an attempt to re-vision or re-create for others the fraught struggle with identity that I had had, a lifetime of watching my Chinese father speak in his world in a language I’d never learned. I could catch glimpses. I know more than I let on, my partner says, and I believe that might be true. But I could never reach inside and grab onto it like a door available for me to open. It was only the window I could peek through—and in that window—I could make up any story I’d like.

At the time I read "Paloma’s Church in America," I was not writing about my mixed up identity. At the time I read "Paloma’s Church in America," I did not know or understand much of avant-garde aesthetics, and I had never written a prose poem. At this time, prose poetry is the space I feel most comfortable in, the poetic space most authentic to my voice. I was in graduate school when I read "Paloma’s Church in America," and had just read Michael Palmer’s Glass Essay. Dana Levin gave a class on post-modernism, and what I still find most revolutionary about that class, is her willingness to let us in on her confusions, her doubts. I didn’t feel I had to pretend to be in the same club. I had already put up my lyric poet dukes for most of the class, and although my gloves were on tight, ready for combat, Michael Palmer got through. He got through with sound. He got through with sentences that, although not quite understandable, were emotionally potent. How did he do that? Like Winnie-the-Pooh, I thunk. I thunk and thunk. I placed my fist to my forehead, I furrowed my eyebrows, I sat against a tree at Warren Wilson, in the mountains, and thunk. When it came time for the ice cream social part of the evening, I coyly made my way up to Dana Levin, and said, you know, I don’t understand what he’s talking about, I don’t quite get it, but I feel an emotional response. Dana Levin, protecting her ice cream from her cape of hair, says to me, I don’t think you’re supposed to. I think you got it.

At the time I read "Paloma’s Church in America," I felt a deep sadness. It brought back to me many associations. It brought back to me a girl in an undergrad creative writing class, a Filipina girl, who started crying in workshop when a white man became quite flippant about her poem talking of the Philippines. This girl started crying because there are kids running in the streets barely dressed, barefoot and screaming. She started crying because it is so sad there, and so beautiful. It brought back to me the first time I met a Chinese adoptee who was being raised by a white chef, how the mother told me there are babies upon babies upon babies, neglected, left in days old diapers, crying one loud wail together. I was about to mis-speak here and utter that Sarah Gambito’s painting is like a photograph. Perhaps it is not misspoken.


At the time I read "Paloma’s Church in America," I could not have imagined that I could ever write about my Asian identity. Didn’t know what to name it, I’d say. Would feel that I was an imposter no matter what I’d say. A creative writing teacher I had at 18 told me that I needed to put poems about my Asianness in my thesis, because, he said, outside of a workshop, no one will know that you’re Asian. Why did that matter, I asked myself. What is the rhyme or reason to paint the color of my skin on my pages just to satisfy the curiosity of my mostly white readers? These days, I am part of an organization to foster visibility for Queer Asians. And my partner is Korean. It has taken me a long time to get from point A (dismissal of my identity out of fright) to point X (standing proud in my non-linear but no less real half-olive light).

At the time I read "Paloma’s Church in America," I could not imagine that I would have written these poems. But I firmly believe they are connected—Sarah Gambito’s beautiful manifesto of the tragedy of Asian America (an idea, an idea, we are always an idea—)—and my own writing out my name in the sand, a pair of feet placed in air with such steadfastness as to hope others see it as a floor.

I have to admit, I’m a little insecure about the way I speak. Sometimes, when I write, I change the way I think so no one will notice what a klutz I am with words. Or prepositional phrases. I mean, how do you learn those kinds of things anyway when you’re stuck in the corner of a room with a thousand Chinese men speaking in words you’ll never understand, but feel you have a glimpse of. Oh, I don’t know anything at all really, except the way they purse their lips together when they have an attitude about a subject. Or how, when one of them sings a song to the scale of the karaoke machine, the rest of them grunt together, like one long ripple of a stone making its way down a river. My siblings, when they knew they couldn’t understand a word coming from these long-known strangers, left the room for their fantasies. I, on the other hand, could have sketched the shape their mouths formed when excited, the gestures their chopsticks made pointing at me in the air, even the way they looked at my little silent deaf face, me looking down all the while. As if casting my eyes down underground made a bit of difference. As if their gaze would one day disappear, and I would suddenly know how to hear.

Sometimes I think my face belies me. Once, I read a novel about a girl whose face is ravaged. Mine must be the opposite, maybe. You can still see the shadow where the baby fat was cleaved off with a Chinese butcher knife. My eyes, they still know how to fix on a subject, wander around in an attempt to look nonchalant. Sometimes, I think I belie my face. Too spongy, an infant told me once, grabbing the mess of it in both hands and kissing me on the mouth. I wonder, if I furrow my brow long enough, will that crease in the middle of my otherwise perfect skin give me just the edge I need? But, let’s not talk about vanity. Not now, as I flash back to the hours I spent in my father’s car staring at my eyes in the rearview mirror. I remember now, how I got in the way of his defensive driving, his blind spot merely me trying to take blindness out of the equation. What equation? Let’s talk about something else. My voice, maybe, how it takes on the language of the ancient, the only English I’ve ever known. Say something to me in another language. Mandarin, for example. 你要月餅嗎? I promise you I’ll nod my head for a moment, laugh a bell-laugh that almost sounds like embarrassment, but could be prior knowledge. Am I making sense yet? Didn’t think so. Go ahead. Grab my fleshy face the way you’d like to grab the moon. That is, if the moon were in front of you on a table, puffy and round like dough. You know you want to.

______________
Addie Tsai teaches Composition and Literature at Houston Community College, where she runs Literary Luminaries, a year-long reading series, featuring nationally-known poets such as Terrance Hayes, Michael Dumanis, Jericho Brown, Dean Young, and Nick Flynn, and will feature Kundiman's Rick Barot this fall. Her poems have been published in Forklift, Ohio, American Letters & Commentary, NOON: A Journal of the Short Poem, and Caketrain, among others. She received her MFA from Warren Wilson College, where she studied with Rick Barot. She is also on the steering committee of Queer and Asian Houston (Q+A), an organization which aims to promote awareness of Houston's queer Asian/Pacific Islander community.
Posted ∀ at 9:51 PM