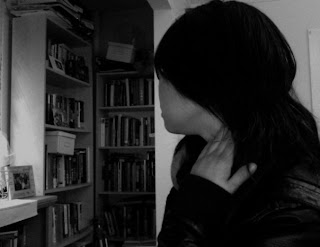 “Yet the child began to grow a phantom tongue. At first it was a test, to see if such faculties of speech were possible. Then it became a practice. The child began to dream the sweetness of kanom, the scent of roots muddied in the riverbank. Began to climb backwards in search of the other end of her mother’s lost tongue.” – Jai Arun Ravine from “Llao: how to peel in seven lessons”

Feminist and gender non-conforming experimental poet Jai Arun Ravine’s innovative and evocative poetry and upholds Emily Dickenson’s definition: “If I feel physically as if the top of my head were taken off, I know this is poetry.” Reading Ravine’s work, I am startled, provoked, and inspired, hir’s poetics runs deep.
through my body, my veins, and flows into my feminist raised fist: our hearts.

This is the work of a feminist Kundiman poet: whose consciousness, body, and poetics transcends constructed boundaries, and these limiting borders of the self. In doing so, Ravine transforms our notion of a poem, poet, and feminist through subverting the page.

I could describe Jai’s handsome face, and stylish clothes, or the fact that se does not only write poetry, but is also an amazing performance artist, drag king, and activist extraordinaire. Yeah, se is pretty much is more than amazing. And se is a dear friend to me. But here, I’m going to attempt to answer, this age-new question: What does a Kundiman feminist poet look like?

I write as a friend of Ravine’s but also all at once, a fan, an admirer and reader of hir’s work. I’m an advocate for poets like Ravine, whose poetics transgress the very rigid boundaries that limit our subjectivity.

At this particular moment, post-1965-stonewall-civil rights-LA riots, we live in a disillusioned, neoliberal, & post-racial world…yet, mixed race, Thai, and queer poet, Ravine’s work is important not only because it survives the page, but for the survival of our selves. Our hearts. Because to add to Emily Dickenson’s definition of poetry, I want to add truth. It’s poetry, when the intimate poetics is shared, from one poet, to a reader and for a community. And we are all blessed to have a truth teller in our midst.

In hir’s manuscript, “Llao: how to peel in seven lessons,” published in Tinfish 18: The Long Poem Issue, Ravine re-imagines hir/she’s mothers immigration from Thailand to the U.S. Through an interweaving of images from a Thai language worksheet, Ravine walks us through the seven lessons, of how to peel. The body and the knife is evoked prominently here and in much of Ravine’s work. Like our lineage of feminist poet subversives, the body is configured within the poem, and on the page, but is cut through and reworked into an utterly new poetics.

I feel these excerpts need no critical explanation: as if scholarly engagement can really help one read a poem. So I ask you here to work through this question with me… although virtually. But let’s provoke an embodied experience.

So this lesson, is to read & listen.

“Execution: Gaw achieved such precision with her knife. There is no question that huddling around the fruit, intercepting its skin latitudinally, is the best method available. There is no distance when the tail is broken. One long line eventually curves. Persistence rewarded with a diversion, a deviation.”

“The birth of Ram was her anchor, but now, so tied, she could not differentiate between the shape of

She had survived, had pulled herself across water to pull this child upon this land. What should this child know?”

In a more recent poem, written in 2009,“We Fear the Body’s Buried Dreams,” (with italicized text from Hermaphordite, Mon Amour by Richard Collins) Ravine again engages and questions the body, a theme persistent in hir’s work:

“Before I had a name for it,
I had a nightmare.
They threw away my wok—
And my knife, you know my knife?”

“A boxing coach owned my breasts
which I couldn’t conceal

I remember looking at nude female torsos
In books, drawn to the shape of white breasts
And stomachs, the divots of shade

I’m stabbed in the chest,
And the hand that wields my blackened knife has a face”

In Ravine’s poetics, the body and the knife figure evocatively, as a metaphor which resonates how language works as a knife dissecting the constructed hegemonic notions of the body and the nation-state Through a feminist move of diaspora, Ravine also provides interventions made through the experimentation of narrative and form.

Moreover, as quoted above in the beginning of this experimental essay/hybrid text & evocation, poet Teresa Hak Kyung Cha imagined what Sappho might say, (a point that the quote was imagined, was discovered by amazing Asian American feminist literary scholar, Shelly Sunn Wong). Like Ravine, Cha’s act of writing is linked with the body from “flesh,” “bone,” “sinew,” and “nerve.” Cha’s inclusion of anatomy resonates with Ravine’s usage of the body as an analytic and metaphorical space to subvert hegemonic ideologies.

As literary scholar (also, fabulous Asian American feminist scholar) Lisa Lowe writes: “Throughout (Cha’s) Dictee, it is often the physical body, which bears the traces of colonial...mutilation and the literal and figural site from which different, often fragmented, speech is uttered in resistance to the imposed competency in the colonizer’s language.”

Like Cha, and our lineage of feminist poets, Jai Arun Ravine interweaves and subverts notions of the body, metaphorically within the poems and physically. The poems breaks, cuts, and re-creates the page with language. Hir’s language. A strategy that marginalized subjects utilized when unable to speak. Moreover, Ravine’s intimate, hopeful, and politically charged poetics, grapples not only with the very notion of a poem, but radically engages with the narrative of the Asian immigrant mother, pulling silenced voices, center, and in the process, finding ourselves. From reimagining hir’s mothers immigration from Thailand, Ravine writes: “She awaited permission to borrow a new tongue.” And with no temporal borders asserted here, Cha continues Ravine, as Ravine continues Cha, so we can be “who you really are.”
___________________
Margaret Rhee is a poet, media artist and interdisciplinary scholar. She has published poems in Back Room Live, the Berkeley Poetry Review, and co-edited the chapbook Here is a Pen: An Anthology of West Coast Kundiman Poets (published by Achiote Press) with amazing Kundiman feministas Ching-In Chen and Debbie Yee. Currently, she is a doctoral student in Ethnic Studies at UC Berkeley. She attended the inaugural Kundiman poetry retreat, and studied with Kundiman feminist mentors such as Joseph O. Legaspi, Marilyn Chin, Patrick Rosal, Myung Mi Kim, Prageeta Sharma, Oliver de la Paz, and Aimee Nezhukumatathil. At Kundiman, she fell in love with poetry & there there.
Posted ∀ at 3:43 AM