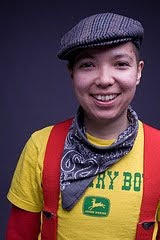 As a queer body, a gender non-conforming body and a half-white body, Kundiman has played a large part in healing scars caused by lineages of exclusion—from “woman,” from “transgender,” from “person of color,” from “Thai,” from “poet.”

Ronaldo V. Wilson, Narrative of the Life of the Brown Boy and the White Man: “The brown boy never dreams of being his own body.”

I came of age at a women’s college amongst creative white dykes. I grasped “writer,” “dancer,” “queer,” “woman.” Sometimes “Asian American” but more often “half-Thai.” Mostly “impostor.” I looked for Thailand in a bookstore in Charleston, West Virginia. Such explanations had already been erased. I never learned how to ask.

Myung Mi Kim, Under Flag: “Not to have seen it yet inheriting it.”

around my neck slipped knot

bound—and the routes we take to escape

“Remember to breathe.” “Speak louder.” “What’s the worst that could happen?”

Padcha Tuntha-obas, trespasses: “fluency. lacking. or was / it. too grammatical. / or was it not to be / explained”

I dreamed the contours and shapes of everything outside the window, but never my own body. I kept looking out the window. I looked until I wasn’t really there.

Bhanu Kapil, The Vertical Interrogation of Strangers: “This is a specific example of a hunger that is immigrant, in that you find yourself unable to ask for what you really want.”

I was obsessed with touch and skin, with edges. I wasn’t sure where desire originated in the body, but I wanted to enter and be entered. I wanted to be ripped open.

a knife releasing skin from fruit

In grad school I grasped “person of color” for the first time, tentatively, then with anger and insecurity. Mixed, I was cornered into a defensive position of perpetual opposition. I wanted to escape, to peel, to cloak. I wanted to find all the answers. I wanted to take on other names.

kari edwards, obedience: “I have been deprived of a name / kept quiet in a place / called eventually / years pass / objects pass / I pass through objects in space”

Akilah Oliver, the she said dialogues: flesh memory: “what is this bitch of fear riding the waves around my chest... / this place where the hard wound of hate eats... / I want the way to myself”

wrestled wind in the trachea

not line but delineation

located in a glossary of negation

Theresa Hak Kyung Cha, Temps Morts: “in search of through which finally my own proper / identity can be retrieved. through the enforcement / of identity here the doubling of identity / the double estrangement.”

Kazim Ali, Bright Felon: “Is that how it happens: one day you turn around a corner and your body is suddenly different and you want something you never wanted before.”

Finding feminism and affinity in the poetics of gay men of color. Surgically removing “she” from the body. “Ma’m”-ed at the grocery store. “Sir”-ed in the post office. Having to decide whether it is safer to use the men’s or women’s restroom. Passing in and out of. Not.

Ronaldo V. Wilson, Narrative of the Life...: “What would have happened to his small, dreaming brown frame of a body if it had not pudged out into the impossible desire to be white, small, and a girl like Tracy Austin? What if he could have seen Serena then, imagined invading her body, becoming her muscled frame, pounding the ball back into oblivion?”

Kundiman opens up a space for me within the landscape of Asian American poetics and allows me, with love, to grasp my own definitions. It has made it possible for me to be an Asian American poet, to be Thai and queer and trans, as if for the first time.

By connecting with a community of Kundiman poets the poetry world is finally made relevant to me. I find that we are all here, with calloused thumbs enunciating our lineages, with gut exhalations languaging our existence. I now hold a language with which to communicate about myself and my work. I have come to believe again in poetry’s ability to make change. I know what is possible.

Kundiman writes me within myself. Kundiman is my lineage.

this and other taken names