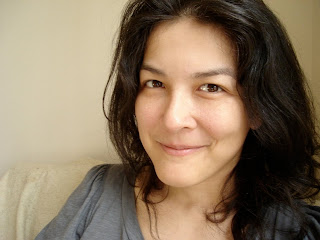 My poetry asks what happens when the other speaks rather than merely being named. Other implies the one others’ have been talking over, obliterating with utterance. My Other might be an actress who is really – but only for a split second -- a man. My other might not want to talk to you and be given voice; that, ironically, is her most express message, her right to silence. My mother speaks in my poems. My grandmother speaks in my poems. A fictional Frenchman speaks in my poems. Gender is just a dial for my speakers. I’m more interested in what they say about silence and names and authenticity of subject position.

When I was little, my father quoted Confucius to me: “Visitors are like fish, after three days they stink.” Yes, I eventually realized that actually he was quoting Ben Franklin. I realized that all that solemn quiet that made me obedient and therefore faithful to my father’s wishes was ridiculous. Additional big reveal: My stern shrewd father whom we all obeyed had been a loud impossible brat! Authenticity of gender and the sheer power of gender implies a test: that the unknown identity will be verified. That an angry rebellious Other will be welcomed into the home. That he or she will speak, that somehow, we gauge power by what is seen rather than through the invisible.

When your family has been split in two by a war, the gold standard can’t be converted. Understanding grows impossible. I resist by insisting that the complete picture, the solid identity is impossible. The experiment has failed. The narrative is deceased. This is my broken record. I share it with Cha’s foggy battlefield, Berssenbrugge’s cornfield that changes color as you ascend the hill, with Juliette Lee’s fracturing of missive forms and corporate language, with Kristin Naca’s slaughtered pig.

These poems were written while I was in transit or very quickly. “Census” was written while I was on a bus and a train: I texted the lines to myself, parsing what I was seeing on the bus with what I had been thinking for days about being in two places at once. This comes from my being half Asian and half European.

The other poem, “Assumed Name” was written instantaneously one morning about how naming can be an unhelpful, disintegrating concept. How Rilke was right when he wished we would “become strong too and not need names.” How we – I’ll dare say we – intersect with Asian-American poetry, or gendered poetry, and resist saying it’s easy, resist presuming to know that stranger: to listen.

I cover my head so as not to be counted.

Yellow saffron died in its husk. The pony moves to the edge of an index,

bottles piled high in this office.

Half this, half that. Sidespeak and undercut: who built

the fucking pier planked out to the nausea?

sun along the earth’s profile, profile of the mountain half sunny half dark.

Needing some new vetiver scent to cover the old sparkle of parsley and gunk.

We know each thing as the version of an idea.

We know each thing as the version of an ideal, made, broadening.

Have you not stuck the ice cream in club soda, for fun?

When the girl gets on the bus with her blonde

I notice her straw hat covering her hair,

a water bottle dropped on her head

rolls off. She looks at me. She

She looks again, wants something. Confirmation. This whole

exposure to a sun beams hard.

Her brother pulls her suitcase to the filth.

She stares at him. He looks afraid.

They are like two animals in a documentary ready to chase.

She bolts toward him. He lunges away but she wrenches his arms

So violently I worry children live vulnerable like ponies

The mother says, don’t do it,

Her luggage precedes her, red and dusty.

Hang back, kid. Each day the earth’s dues

the difficulty of sticking with one love,

one mind. Teeming in the sea.

Bivalves made of smaller stardust. We, too.

Whether or not rainbows shoot out

your eyes, you’re a quiver in the boundary

And what’s left but to say

The sea lived with an assumed name that stands for real too.

Verifiable commonness, the vowels a way of hiding.

That and the fridge booming out its noise every hour

while a corporation filled in the hello my name is sticker.

If only we would let ourselves be dominated as things do

by some immense storm we would become strong too

and not need names he said to a blue robe thrown

I’ve spent my life referring to maps, trying to split myself, be

present to win an entire Tri-State. The car held its mirror

so we’d stop multitasking, and concentrate on a direction.

The robe said whatever and started to split across a particular

seam, riding round in that heat drum. It was big enough

dazed, look straight at the man behind the counter, and what,

he says what size the salad, and his eyes ask are you really here—

this countryside the sun shone on to make the lettuce,

what hauled it here, the road spelling a word that makes no sense.

Cynthia Arrieu-King is an assistant professor of creative writing at . Her book People are Tiny in Paintings of China is forthcoming from Octopus Books. Her poems and other work will come out this year in Review, Witness, Jacket, Harp and Altar, Forklift , and with Kristi Maxwell in the new horse less press anthology New Pony. Marilyn Chin sent her to Kundiman when she visited the in 2006.

"while a corporation filled in the hello my name is sticker" - ooh, brilliant!