The laboratory was a frightening place.

All over the walls: hanging white coats, safety posters, warnings.
On the long black counters: test tubes, Bunson burners, flasks, bottles, coffee cups, sample jars (water, soil, acids), Petri dishes, microscopes.
And in the corner there was an eye wash station which scared me most of all.
With a cup to put your scalded eyeball in, then flush it out for twenty minutes and hope you could still see.

Six stories underground: this secret place is where my father worked.
We were allowed into his lab once a year, for the Health Department's Christmas party.
In the threadbare lobby outside the laboratories (there were many, we could only go into our father’s) all the jowly old chemists sat in square brown chairs (it was 1985),
ignoring the party, muttering about the bureaucrat currently making their lives miserable.
We had to dress up but they just wore their lab coats like a pack of cartoon scientists, horn-rimmed glasses all.
My father wore these too, but he was younger: his hair was black where theirs was white.

Before the party, the chemists’ assistants filled beakers with M & Ms; easy to pour them in your mouth if no grownups were looking (and they usually weren’t) and this was the only fun to be had,
besides sneaking off, opening drawers, and rearranging their contents.
After three painful hours in this windowless place, we left as a sullen family unit.
My sister and I complained the whole way home.

My father—who spent eight hours a day at the lab, five days a week, fifty weeks a year—gripped the steering wheel
and ignored us. 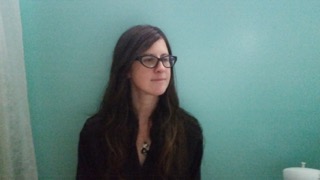 ERIN VIRGIL is a poet and illustrator. She has an MFA from Naropa University and her work has been published by Queen Mob’s Teahouse, Fast Forward Press, Indigo Ink, Wolverine Farm, and Colorado Life Magazine.  Her first prose book, memory holes, was published by Monkey Puzzle Press in 2014, and her latest poetry chap is Fantastic Voyage to the Ordinary Planet, out from Dancing Girl Press.  She keeps up a movie review blog at emvlovely.wordpress.com.