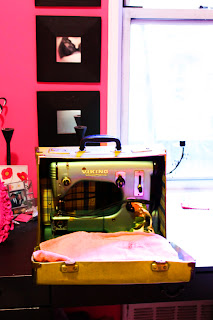 Q: Would you believe that every morning I wake up in my black lace brassière and smudge the kohl-black sleep out of my eyes and stumble into my study where I snap open my mother's sea-green Viking sewing machine and sort of cast about me (in that green sea) for any old material--a towel, a carpet, a J Crew catalog, a couple of takeout boxes, some fascicles--and get the machine up humming and just start whipping frills? 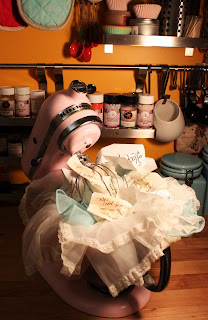 Q: How do you whip a frill?
a) with an eggbeater
b) with a raglan sleeve
c) what did the frills do wrong? 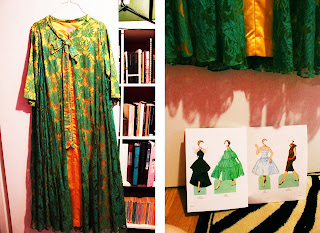 Q: What kind of poem has raglan sleeves?
a – d) write your own poem on a separate sheet. 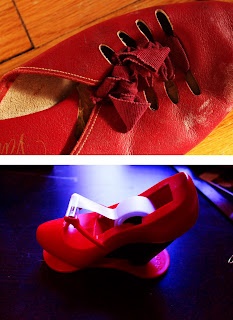 [I can't make clothes like poems/I’m not sure if I can make poems like clothes. I can put clothes in poems/read poems in clothes. One time I went around muttering "red shoes, red shoes." Then I bought these red shoes. I wore them with a red dress & a copy of Ulysses; with a blue dress & a copy of Romeo and Juliet; with a pink skirt & the Faber & Faber edition of Ariel, the one with red tulips on the front. Then I fell down in a park or something and wrote a poem about them! and in them!

Then people thought I liked shoes so they started buying me things shaped like shoes. Mostly those things are useless but this tape dispenser comes in pretty handy.]

Q: What is blurbling off your lips this morning? And is it also on your feet? 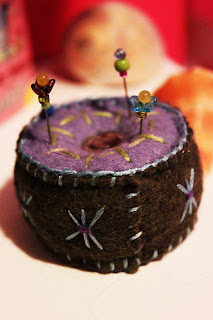 [I could use these pins to stab-bind a fascicle. But I mostly don’t. I just use the tape dispenser and the Kitchenaid mixer and the shoes. But you know. Sometimes you need to learn to love frills before you can whip them.]

Q: Would you rather
a) whip frills
b) rip seams
c) stab bindings
d) stumble around in a black brassière

SCORING:
Mostly a’s: Your frills are dream-frills: so positively foamy they fill up the dream-frame. When we wake up they seem to be gone, but there are those telltale bubbles.
Mostly b’s: You seem to be able to make real frills; please send me some through the U.S. Postal Service.
Mostly c’s: I kind of think you are Emily Dickinson?
Mostly d’s: Let us put on our trashiest peignors and have a mint julep together or maybe a cherry coke.

Bio: Caolan Madden lives in Brooklyn & sometimes makes poem machines (but not sewing or mixing machines).
Posted ∀ at 5:47 AM

"Then I bought these red shoes. I wore them with a red dress & a copy of Ulysses; with a blue dress & a copy of Romeo and Juliet; with a pink skirt & the Faber & Faber edition of Ariel, the one with red tulips on the front."

yes! I am a huge fan of the bookcessory <3

i LOVE this. so so so much.

I wish I would have actually kept score as I went along because once I got to the scoring section I was blown away and very disappointed that I didn't know which one I was. But definitely either an A or a D (a D of the mint julep variety).

It's pretty tricky to actually keep score, since there's only really one opportunity to get any d's! And most of the c's have very little to do with Emily Dickinson. But with these quizzes you always KNOW which one you really are; I totally agree that you're an A or a D, Becca. Maybe both.

As for bookcessories: Ever since I got a hot-pink Kindle that goes with everything, I've been neglecting the possibilities of the bookcessory. I should bring it back into my life!