As a child, I drew incessantly. My parents, both artists, were perplexed, and eventually frustrated, by the fact that all my drawings were of beautiful, shapely women laden with accessories and wearing elaborate outfits. By high school, I had abandoned this subject matter, but sought another artistic preoccupation in vain. It was perhaps because of this loss of focus that I abandoned my artwork altogether and took a 15 year hiatus which led me through academia and eventually out the other end. When I reemerged, I found myself painting portraits of politicians, then figures of political import. I have been painting politically for five years now, incessantly, prolifically. It was only last week, when I painted the final installment of a series on the Egyptian protest movement, that my childhood obsession with fashion finally expressed itself in my political art. 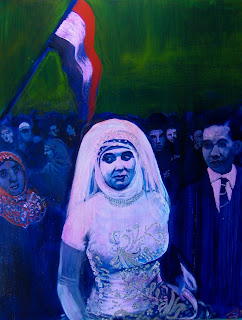 Bio: Daisy Rockwell paints under the takhallus, or alias, Lapata (pronounced ‘láh-puh-táh’), which is Urdu for “missing,” or “absconded,” as in “my luggage is missing,” or “the bandits have absconded.” She posts her paintings regularly to Flickr, and writes for the blog Chapati Mystery and the literary review Bookslut. She has shown her work in San Francisco, Los Angeles, Philadelphia, Washington, DC and North Adams, Massachusetts.

Lapata grew up in a family of artists in western Massachusetts, some whose work adorns the surfaces of chinaware and brightens up the waiting rooms of dentists’ offices, and others whose artistic output has found more select audiences. From 1992-2006, Lapata made a detour into Academia, from which she emerged with a PhD in South Asian literature, a book on Upendranath Ashk and a mild case of depression. Nonetheless, she sometimes still teaches Hindi.
Posted ∀ at 6:23 AM