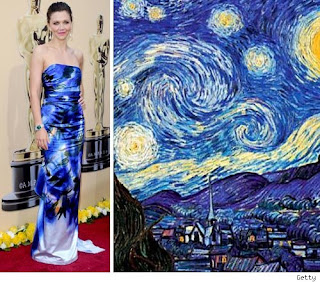 I died for Beauty -- but was scarce
Adjusted in the Tomb
When One who died for Truth, was lain
In an adjoining room --

And so, as Kinsmen, met a Night --
We talked between the Rooms --
Until the Moss had reached our lips --
And covered up -- our names --


our deliriously white-hemmed heroine was a fashion failure. i’m sure she wore white after labor day, to her brother’s wedding, to her garden parties with the finches, to her own funeral, even. emily’s white dress(es) is (in)famous not because it is/was particularly becoming but because it broke rules. it marked emily as a certain kind of woman, a poet. it marked her as a certain kind of poet. if you are a woman, if you are a poet, if you are a woman who is also a poet (or a poet who is also a woman), there is no such thing as ‘neutral’ clothing. everything you wear MEANS SOMETHING. everything you wear is a costume. an aesthetic argument. even if you’re just wearing a ratty pair of sweatpants + a grease-stained t-shirt you grabbed out of your roommate’s laundry hamper, you are making a FASHION STATEMENT. you are either following the rules are you aren’t (probably, if you’re a poet, this means you aren’t—). you are making a BEAUTY STATEMENT. an ART STATEMENT. a TRUTH STATEMENT. i mean, yea, work it. 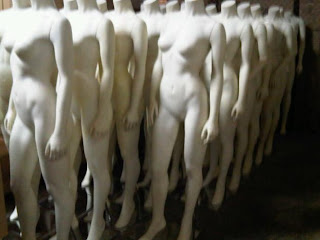 REUTERS: NEW YORK— Paris-based designer Christian Louboutin, whose pumps have graced many fabulous and famous feet, sued fashion rival Yves Saint Laurent over the use of the color red on shoe soles…"The Red Sole has become synonymous with Christian Louboutin and high fashion," it (the lawsuit) said, adding that Louboutin had trademarked the design in the United States in 2008 (MSNBC, 4-8-11).

in fashion, you can trademark a color.

+ you can trademark the sole of a shoe.

++ fashion falls under the protection of intellectual property law. as do paintings. +++ poems.

once, i wrote a poem about a dead rabbit (i was in undergrad—). i took it to workshop + some people praised it + some people thought it was kinda meh. the next week, another woman in the workshop brought in a poem about a dead hamster. now, a dead hamster is not a dead rabbit + this woman’s poem was very different from my poem (her poem, for example, was set in a second grade classroom whereas mine was set in a cemetery). but it still bothered me. a little bit, at the back of my throat. i felt as if she was copying me, STEALING FROM ME, even though I knew that, in poetry, there isn’t any such thing as stealing. there is only borrowing. homage. inspiration. 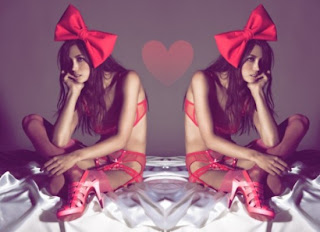 the louboutin brand should be rather familiar with the concept of borrowing. with paying homage. with taking inspiration. for their fall/winter 2010 campaign, louboutin put out adverts that mimicked seventeenth century oil paintings. the adverts were still lifes with louboutin shoes + the kind of foodstuffs the rich folk of the seventeenth century would velvet-line their bellies with, would commission still lifes of. the art historian/social critic john berger, writes a lot about oil paintings + consumerism in his seminal work ways of seeing. berger goes:

But what are these (seventeenth century oil] paintings? Before they are anything else, they are themselves objects which can be bought and owned. Unique objects. A patron cannot be surrounded by music or poems in the same way as he is surrounded by his pictures…They show him sights: sights of what he may possess. 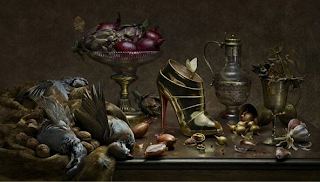 Publicity images (advertisements) also belong to the moment in the sense that they must be continually renewed and made up-to-date. Yet they never speak of the present. Often they refer to the past and always they speak of the furute…[they] propose to each of us that we transform ourselves, or our lives, by buying something more. This more, it proposes, will make us in some way richer—even though we will be poorer by having spent our money. Publicity persuades us of such a transformation by showing us people who have apparently been transformed and are, as a result, enviable. The state of being envied is what constitiutes glamour. And publicity is the process of manufacturing glamour.

berger goes on to take a rather dim view of manufactured glamour, he dismisses it as a byproduct of the industrial revolution, capitalism, + the rise of advertising. but, berger’s description also sounds dangerously close to the description of the project of poetry-making. poems must continously be renewed and made up-to-date. they might speak of the present but more often than not they refer to the past + always, always, always the future.

do poems produce envy though? i don’t know. do readers envy the personas in poems? sometimes. if the personas seem especially free of whatever’s weighing down on the poetry reader (job, spouse, credit card debt, cancer, systematic government opression…). is that the poet’s job, then? to create an enviable, glamorous world for their readers? in order to motivate their readers to—what?—
transform herself. not by buying an item persay, but by buying whatever the hell it is that the poet is selling. this is what we mean when we say i like what she’s putting down. poems are, maybe, publicity for the poet’s ideas about BEAUTY + ART ++ TRUTH.+++ poems are publicity statements for the poet’s FASHION. 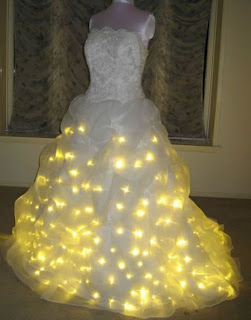 
Bio: Daniela Olszewska is the author of six chapbooks, including The Partial Autobiography of Jane Doe (dancing girl press), Citizen Jane Trains For Many Different Kinds of Careers (horse less press), and halfsteps + cloudfang (plumberries press). She lives in Tuscaloosa, where she is purusing her MFA at the University of Alabama. With Carol Guess, she is working on a manuscript of poems inspired by the website wikiHOW. Daniela recently spent less than $100 on a white, floor-length Dior coat from the 1950’s.
Posted ∀ at 3:47 AM

I really love this post Daniela - so much smartness & glamour in many different forms/layers. I'm going to think more about poem as publicity...