We are in need of our subject, the substantive, our predicates: our elementary sentence, our basic rhythm, our morphological identity, our generic incarnation, our genealogy.
--Luce Irigaray 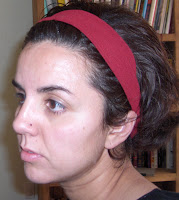 “Numbers Trouble” was one of many signs I’ve lately taken from the universe that I should be thinking about my work as a poet and writer and publisher in relation to feminism. My feminist pedigree extends far enough--into the late eighties and early nineties--in order for me to recall some of the anthologies mentioned in Spahr and Young’s essay; I also recall the thrill I felt at reading much of this work, of discovering the project of telling women’s stories toward the end of fighting for equality for women. I came of age as a feminist under the tutelage of charismatic women’s studies professors who told me about my cervix and about God being a woman, and in retrospect I yearn for that idealism. I now hunger for work that does that kind of work. What if our poems really could remake the culture around us? Or, dare I say, remake the world? Why have I lost touch with this ideal? What happened to the utopian in feminist aesthetic thought?


I think “Numbers Trouble” should serve as an occasion for a second look at the world of women’s poetry, but I think that numbers don’t tell the whole story. What if the journals were publishing 70 percent women or 80 percent women? What would that suggest, exactly? The mere fact that women are being published does not address the dearth of contemporary avant-garde work that explicitly addresses feminism, work that enacts the strategies of a feminist project, of a feminist politics. Where are the poems being published that work to advance the agenda of women’s rights? Simply being a woman and being published doesn’t guarantee feminism.

Perhaps this is distasteful. I find this very difficult to write about. How can I write about the politics of rape, of birth control, of child care without seeming like some out-of-date harridan-confessional poetess? Feminism (in its original incarnation) is out of style, and what I’d really like to see are poetries that bring it back. And what I’d really like to be doing is writing some of these poetries. Being a poet offers a kind of agency that is not available to many people: perhaps it is time to begin making different use of mine. By problematizing gender, or even by solving it, we haven’t done much to effect change in the day-to-day lives of women, have we? Where’s the praxis? I yearn to see the feminism-on-the-ground in poetry.

Turn everything upside down, inside out, back to front. Rack it with radical convulsions, carry back, reimport, those crises [the] "body" suffers in her impotence to say what disturbs her. Insist also and deliberately upon those blanks in discourse which recall the places of her exclusion and which, by their silent plasticity, ensure the cohesion, the articulation, the coherent expansion of established forms.

A poetry that exists along the continuum of experimentation and narrative, perhaps akin to Stephen Burt’s elliptical poetries; a poetry in which language works to accommodate the feminine, yes, but a poetry that also works to accommodate the stories of women, to bring to light the struggles of women as explicit subject matter. I think it’s disingenuous to suggest that many of the battles that feminists waged in the sixties and seventies have been won: We’re still fighting--a losing battle, it would seem--to have the Constitution ratified to suggest to its readers that women are considered by this government to be equal to men. At a presidential debate the female candidate is asked, "Diamonds or pearls?" Is this the best we can do?

To establish my participation in this process, I invite poets to envision the most radical potentialities of a new feminist poetry. I will publish manifestoes, polemics and plans under the imprint Womanifesto, and I’ll distribute them like a suffragette. Anyone interested in writing or helping publish this work, please write me at: carmen [at] noemipress [dot] org.
Posted ∀ at 4:18 PM