Gertrude Stein makes a speech to the future: 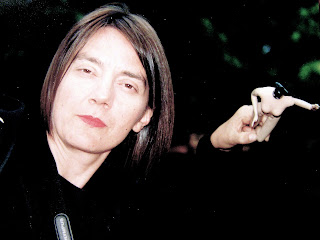 Do not argue: do. That's what I said and did. The shape of arguing isn't interesting. Sentences flag. Assaulting isn't being. Being assaulted isn't interesting either. Nor is turning away. The blind have vision but those with heads in the sand have sand in the head. Turning away isn't interesting, but walking with purpose is. Walking with purpose is creating. The best response is being and doing and creating. Many consider being an attack, someone different being themselves is sometimes attacking without even doing. That is not the fault of the person being it is about the person not allowing other forms of being. Attacking as I said, isn't interesting, nor is responding to attacking. I have said elsewhere that sentences on there own are without emotion but interesting sentences leap over attack. So you see, being is a kind of leaping because it is reaching. Sentences need air. One builds a paragraph like one builds a fire: a log, a log, a log, and a place for air and a place for flames. It is the same with being. That day with Hemingway at the door it was words that enflamed his ear. There was no point in arguing. The sentences exposed a feeling in him. That feeling then was attached to my being. He was seeing my being in a way that improved his own but was squinting. That is why getting out in the world is always better than hiding indoors. When a person squints he takes in what he needs and nothing else. When his ears become enflamed he opens his eyes with purpose and suddenly he finds the world is less convenient. Nothing changed with myself you see. And not arguing made it possible to be and create. My sentences advance. There are two paths in the desert and mine continues long after Hem had stuck his head back in the sand.

After that there was a long bumpy ride. People say I didn't mention enough of life. When one is being life, one doesn't worry about hitting other people's notes. One doesn't worry about other people reading one's notes either. One simply is and by being and doing one makes space for difference. Small gaps aerate culture and new ideas grow. Sand-filled heads are heavy and mostly without vision. No danger of a brush fire there.

My life was long and well-fed, with a second pair of arms and legs, with ample belly. It helped that she could cook and I could appreciate her. Appreciating properly is underestimated. Loving is an art as fine as any other but mostly invisible to everyone but the one adored. And not in hiding or in code. No less coded than any of the wives and more famous in the end, a name her own. She too lived with force. With equal force. When she and she come together with equal force there is no mistaking. That is what you didn't know. Or trust. Making sense is not the same as being simple. Clear is clear is clear, I said it and I did it.

Now you may or may not appreciate that being and doing are not the same as complying and not arguing is not being truthful but I am here to say that being is more forceful than arguing and even better than saying is writing down, but not quite as good as being though it is doing and useful because it makes a map for others. Feeling full for it, that's what to do. And do again.

And that is how to be yourself and make a difference.
Posted ∀ at 4:21 PM

At first I thought, wow Sina has really reduced her prose style.
She's so assertive! Go Gertrude!
Go Sina! Go all of us!
Mairead