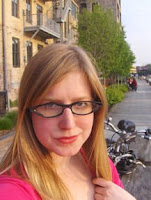 Becca Klaver was a Filmic Writing major for two years and has a story forthcoming in The Literary Review, but is pretty much a poet. You can find her at beccaklaver.blogspot.com.

YOU & ME & MIRANDA JULY
A Fanzine 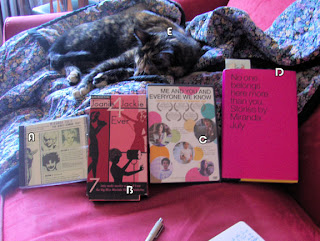 For a while I was the only one I knew who’d heard of Miranda July. The year was 2001, and the Joanie 4 Jackie 4ever VHS tape was the first thing I’d ever asked a professor to borrow. I took it home to show my roommates July’s video “The Amateurist,” in which a “professional” woman watches an “amateur” woman (July plays both) on a television set, the former tracing the latter’s body movements and “scientifically” (“arbitrarily”) assigning them qualities, such as numerical value or shape (What might it mean to be a four?, ‘The Amateurist” wonders convincingly). The video made me laugh and made me think; it made my jaw drop; it kind of scared me; it made me want to make art.

Eight years later, July might be the most famous video artist in the country, since she is by now also a successful filmmaker, fiction writer, curator, and more. Here, I won’t presume to introduce you to her, but I’ll say a bit about why it’s so gratifying to have been a fan of hers over the last decade.

Miranda July is as weird as you can possibly be and still be popular. This is no small feat, being weird and popular. It makes other indie auteurs resent her (if playfully—see DVD liner notes to Andrew Bujalski’s Mutual Appreciation, which had the misfortune of being another terrific film cruising the festival circuit the same year as Me and You). It makes mainstream critics use the work “quirky” a lot. (A lot.) It makes her an “indie darling.” (No, Andrew Bujalski, guys cannot be indie darlings—but you can be an “indie gallant”!)

This paradox (oddball/popular) has its root in July’s feelings about audience. As she says in a Pretty Cool People interview: “Since I started making art, I’ve always had some kind of project that was really about and for other people, because I think I just need that balance to feel sane myself, you know?” Not every artist heeds the desires of—or even deigns to think about—her audience. Perhaps because of July’s experience as a performance artist, she’s constantly considering the people who are watching, listening, and reading, often addressing us via the “you” in her titles (besides Me and You and Everyone We Know and No one belongs here more than you, she also co-curated the collective art project website Learning to Love You More ).

A true multimedia fan, I would’ve forgiven July if her short story collection, No one belongs here more than you, had tanked. I knew it wouldn’t, though, because I’d already knelt on prickly bookshop carpeting to read her story “Birthmark” in The Paris Review from start to finish; I’d already debated stealing my neighbor’s New Yorker to read “Something That Needs Nothing” (I went inside and found it in an academic database instead). The magic of these stories comes from July’s ability to render her strangeness so crystal clear: she lets her characters and narrative turns gleam in all their oddity until the writing seems to disappear. The prose moves with a filmmaker’s pace and a performer’s assurance, as if the medium were beside the point. But, of course, it isn’t: the prose is driving all of it, limpid, exact. This is no ingénue expanding her portfolio. July is a writer as much as she is any other type of artist.

I could never choose a favorite MJ medium, but her stories give the most pleasure in certain ways. Anyone who’s read a book and then watched the film adaptation knows that while a work of fiction can exist in pure psychological interiority, a movie demands externalization via conflation, symbol, objective correlative. No one belongs here more than you luxuriates in interiority; much of the pleasure of it grows out of July’s ability to successfully portray all the twists of a mind in turns surprising and true. It’s much harder to do this in a film—though she does gets away with letting her Me and You protagonist talk to herself, and manages to make things like pink flats and hope chests characters unto themselves.

When critics groan that July’s work is too “quirky” or “precious,” a red flag goes up, telling me that I might be dealing with a reviewer who is queasy around vulnerability, who prefers his emotion brusque or repressed or cowboy, who would rather his artists not look him in the eye. Across media, July creates stories that show the forces that keep people apart and the bizarre, uncomfortable, ecstatic scenarios that can ultimately bring them together. There are people who find this cloying. To me, it’s a powerful aesthetic based on an ethics of compassion and connection, of laying oneself bare in hopes of being recognized, being loved more. In some ways July’s “quirkiness” is a spoonful of sugar that helps her benevolent vision go down; in many ways, I think we need more artists like her in the mainstream.

So, I include the following excerpts for those of you who have suspected until now that July is either too kooky or too laurelled for your tastes. On the contrary, I suspect that no one belongs here more than you.

I was the kind of coach who stands by the side of the pool instead of getting in, but I was busy every moment. If I can say this without being immodest, I was instead of the water.
*
Always running and always wanting to go back but always being farther and farther away until, finally, it was just a scene in a movie where a girl says hello into the cauldron of the world and you are just a woman watching the movie with your husband on the couch and his legs are across your lap and you have to go to the bathroom.
*
It was a new experience to walk across the city in tiny shorts and a half-shirt that said HONK. People honked without even seeing the shirt. I often felt that I would be shot in the back with an arrow or gun, but this didn’t happen. The world wasn’t safer than I had thought; on the contrary, it was so dangerous that my practically naked self fit right in, like a car crash, it happened every day.
*
It was not immediately obvious who Ellen was because we did not play any name games at the start of the class. Past a certain age, they give up on name games, which is regrettable for someone like me who loves anything that involves going around in a circle and saying something about yourself. I wish there was a class where we could just keep going around the circle, around and around, until we had finally said everything about ourselves.

Sleater-Kinney, “Get Up” (music video)

Getting Stronger Every Day (video)

Are You the Favorite Person of Anybody? (video)
Posted ∀ at 1:12 AM

I'm jealous you have the pink No One Belongs Here...--Amazon sent me the yellow, which is what I get I suppose for not shopping at my local independent bookstore.

My introduction to Miranda July was when I accidentally attended what I'm pretty sure was the American premiere of Me and You and Everyone We Know, at the IFC Center in New York during my first trip there. I didn't know anything about her or the movie going in, and after it was over she suddenly appeared in the front of the theater and talked to the audience! I don't know if you've ever seen a person in a movie you've just watched suddenly materialize in real life before your eyes, but man was that exciting.

I need to read her book now. It's insane that I haven't.

Kate-- I, uh, actually have two copies of the pink (one was a gift that I couldn't bear to sell back -- thanks, Brandi!), so maybe someday I could trade you! Lining up that stuff against my pink couch made me realize just how pink the MJ palette is.

Matt-- That sounds awesome, and I'm stealing Kate's jealousy and passing it along from me to you. It also sounds very surreal, very LA actually. Yes you should read the book--and guffaw! and weep!

A one day trade would be fab!