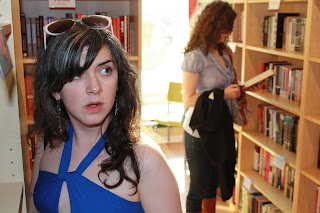 Sarah Murphy is a school librarian and works with students from Kindergarten through twelfth grade. She and Maria Falgoust founded the Desk Set, a community-building and party-throwing group for librarians and bibliophiles, in 2006. Sarah lives in Brooklyn. [Ed. note--if you're in Brooklyn, check out the fundraising Dance Dance Library Revolution party thrown by the Desk Set at Enid's tonight! Details here. Proceeds go towards Books Through Bars.]

No matter how young most of my adult friends behave/look/are, it’s generally only the librarians among them who ever touch Young Adult literature. The others are missing out on some very beachy reads: short, fast-moving, active. YA lit uses straightforward honesty to address subjects that adults tend to like wrapped in metaphor, irony or studied indifference. Subjects like sex, abuse, desire, discovery. The result often feels salacious, even –yes- devious. It’s good to know that kids are reading this stuff.

Shiver by Maggie Stiefvater
Scholastic to be published August 2009

Six words that describe these books: Girl on bear / Girl on wolf

I was surprised to read two YA books in about as many months that featured a thwarted love story between a young woman and a beast. In both books, men in nonhuman form (a bear in Tender Morsels, a wolf in Shiver) enter the worlds of our heroines and form a very human connection with them.

The love story is central to Shiver, in which 17 year-old Grace’s lifelong fascination with the wolves - and with one wolf in particular - outside her home turns into an affair with Sam, who must be called a werewolf (though not at all in a “Teen Wolf” sense). Grace is conveniently assigned to rather absent parents, allowing the relationship to progress quickly and without the hiding and lies most real teenagers depend on – even when they are dating humans. Grace’s confidence in her own sexuality is refreshing, and it’s very satisfying to see her get Sam, who is nervous about hurting her both as a man and as a wolf, to give in to desire with no guilt and no regrets.

In part a reimagining of “Snow White and Rose Red,” Lanagan’s Tender Morsels lays bare the brutal nature of a fairy tale without compromising the promise of magic, the power of dreams. Liga has lived through disgusting brutality in the “real” world, and emerges into a world of her own creation, one where bears and wolves make far gentler companions than men, and where her two daughters can live removed from both danger and shame. But as liberating as it may be to walk with bare shoulders and bare legs without accusation, a world that safe can’t sustain much in the way of life, and certainly nothing in the way of love.

Both books are really more suited to a forest than a beach, perhaps a lake, but certainly no ocean.

When I first read Tender Morsels, I read the first page out loud to as many
people as would listen. Which brings me to:

A favorite quote from book, page one, the Prologue:

There are plenty who would call her a slut for it. Me, I was just glad she had shown me. Now I could get the embarrassment off me. Now I knew what to do when it stuck out its dim one-eyed head.

She were a revelation, Hotty Annie. I had not known a girl could feel this too. Lucky girls; they can feel it and feel it and nothing need show on the outside; they have to act all hot like Annie did, talk smut and offer herself to the lads, before anyone can tell.

When I finished Shiver, I wondered. For a brief second I felt disappointed, but
was ultimately pleased that the ends weren’t all quite so tied as I thought they’d be.

These books will probably not fly off my library’s shelves, but I’ll keep recommending them.

Tender Morsels is an anxious puzzle; Shiver is a young moment. Both will be found in the children’s sections, and heavily read by librarians and hopefully some curious others.
Posted ∀ at 1:20 AM