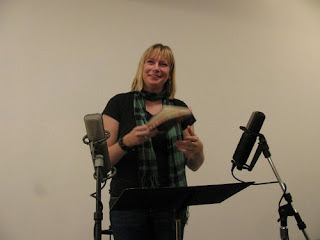 Brandi Homan is originally from Marshalltown, Iowa. She is the author of Hard Reds (Shearsman, 2008) and Bobcat Country (Shearsman, forthcoming 2010). She earned her MFA in Poetry at Columbia College Chicago and is Editor-in-Chief of the feminist press Switchback Books. 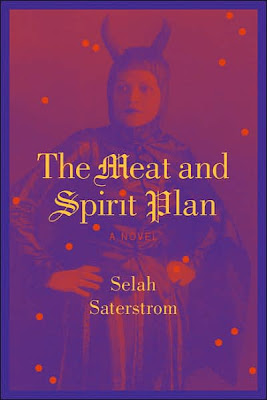 The Meat and Spirit Plan
by Selah Saterstrom


One of the saddest things I've noticed about living in the city is seeing the shoes. Not the ones that dangle in pairs by the shoelaces from telephone wires, although they're also sad, but the ones we aren't meant to notice. A grimy purple flat next to the curb, half buried by leaves and litter. A black pump tucked under the hedge. One soft leather loafer on the sidewalk and the next a few feet down.

I always wonder about these shoes and worry about the possibility of crimes committed against their owners who have left something so necessary so haphazardly. I mean, I'm sure that a significant number can be attributed to fairly mundane reasons... a drunken night (non-comfy shoes taken off), a drunken fight (taken off and thrown), or just simple transport gone wrong (dropped out of a box while moving). Still, the shoes could be remnants of unreported, unrecognized violent acts, small or large. In The Meat and Spirit Plan, Saterstrom unearths all manners of atrocity simply by following her female protagonist from high school through college and beyond. She quite literally shows the acts behind the single shoes.

I absolutely love this novel's straightforward, unabashed, deadpan, often hilarious voice. I wish I had more knowledge of issues of class in literary theory to be able to properly talk about this book, but for now I'll have to settle with giving you the gist of it. I do think this book couldn't have existed without writers like Dorothy Allison coming first—it's a kuenstlerroman following a girl with a junkie mom and noticeable lack of adult supervision from the small-town south through reform school, college both local and abroad, and her return to her hometown. This novel reminds me of just how close we all are to falling through the cracks. If you don't know this girl, you at least know of her: the one in the black death metal t-shirt at the back of the room that doesn't say a thing unless spoken to first. I know a lot of these girls. I am part that girl. Do you ever wonder what happened to her? Selah Saterstrom tells here how one woman gets through.

And for the quote, here's a cento composed from Selah's lines (the title is also Saterstrom's). Please note that the books' characters are conflated to suit the poem's purposes. Also note that the poem doesn't come anywhere close to doing the book justice.

Listen, I am in love.
Hello Ginger Rogers.
Who couldn’t like a girl in a bikini.
If you are over twelve you can purchase alcohol.
Before I can answer she says: Are you a hooker?
No I say. I’m a movie star.
Parents should never name a girl Chastity.
Were you the girl doing it in the shower, she says.
The way her hips sink into chairs I know she had grace before it got used up.
She is like a pencil drawing that is slowly being erased.
She grips her beer until her knuckles go white.
I say: I used to know these guys.
She is looking at me, amused and horrified by my shaven head.
Well kiddo, she says, we try and sometimes we fail.
It was like if you had any talent you had to leave.
I cry in the parking lot of the Kmart waiting for the bus.
Furniture can be a witness.
You weren’t pregnant, he says.
Eventually, he becomes my boyfriend.
If you’re good, he said, matching ring for Christmas.
I do not get the shoe back.
It smells like ashtrays and the curtains are drawn.
His work boots are on and I don’t care that they are in the bed.
I feel something that may be my childhood.
I cannot help the tears streaming down my face.
I finish my smoke but don’t leave.
I could write anything.
Good-night Ginger Rogers.
The woman in every movie comes together in one woman.
Fucking cramps, she says as she flicks a cigarette.
Where was I going when I was going to go?

This is one of my favorite novels ever. Love the cento.

Congrats on a beautiful cento (DT would be proud) and on being named one of Chicago's Lit 50 today, woohoo!

Plus Kristy Bowen! That's right, not one but *two* feminist editors (and *cough* Columbia College alums -- there, I've covered all my allegiances!) made the list!

Hey thanks you guys. I was worried that the cento didn't stand up on its own but now I think it does...