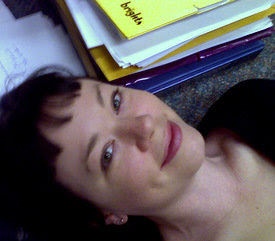 Mary Biddinger is the author of Prairie Fever (Steel Toe Books, 2007). Her work has appeared or is forthcoming in Copper Nickel, Crazyhorse, Gulf Coast, The Iowa Review, The Laurel Review, North American Review, Ninth Letter, Passages North, Ploughshares, Third Coast, and many other journals. She is the editor of the Akron Series in Poetry, and Co-Editor-in-Chief of the independent literary magazine Barn Owl Review. She teaches at the University of Akron and is the new director of the NEOMFA. She blogs at The Word Cage.

When I first read this book, I became startled when anyone spoke to me. Yoshimoto’s prose enters the reader imperceptibly, giving the sense that someone is whispering the story into your ear.

This book will make you hungry for things you never knew existed, and will put the uncanny echo of ocean waves in your head.

This book transports you to the seaside, even if you are thousands of miles from the shore.

This book is a pickled vegetable, the kind consumed by Yoshimoto’s characters. Impossible to judge through the packaging, vibrant when experienced, striking in its lasting impression.

The rocky shore was lined with little stands and shops that only stayed open for the summer. They were all boarded up, with an aura of emptiness about them that made you think of ghosts. Way out in the water the flags on the buoys were swaying vigorously back and forth, in time with the roar of the waves. The slight nip in the wind cooled our burning cheeks. We all bought sodas. The clunking of the vending machine in the night seemed to send a shiver of surprise across the entire pitch-black expanse of the beach.

For all of us who learned, in retrospect, that a particular summer was the best summer ever, Banana Yoshimoto offers Goodbye Tsugumi, a novel of deceptive simplicity and lively intrigue. Like all of Yoshimoto’s novels, the world of Goodbye Tsugumi is strikingly real, even if the reader has never visited the Japanese seaside that serves both as backdrop and character. The protagonist of the novel is Maria, daughter of a single mother and a father who has just divorced his longtime wife. Upon leaving her seaside resort town home for the bustle of Tokyo, where her family will at long last be complete, Maria realizes how much she values not only the landscape and spirit of her hometown, but her enigmatic cousin, Tsugumi. Half sickly waif, half hell-in-a-handbasket, Tsugumi smashes onto the scene with a foul mouth, a penchant for cruelty, and a weakness for newcomer Kyōichi. As Maria returns for one final summer by the sea, Goodbye Tsugumi chronicles a last chance at reconnecting with family before adulthood fully sets in, with unforgettable characters as our guide. Always atmospheric and never dull, Yoshimoto’s prose is the ideal beach read to lose yourself in. Prepare to be hooked, and stash a copy of Kitchen, NP, or Lizard in your beach bag just in case.
Posted ∀ at 1:51 AM

kitchen blew my mind. not an entirely comfortable experience -- but so compelling that i re-read it every several years... thanks for the two-thumbs up on yoshimoto's newest book.