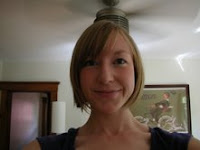 Elisa Gabbert's recent work can be found in Colorado Review, Diagram, Eleven Eleven, Meridian, Pleiades, Typo, Washington Square, and other journals. She is the author of two chapbooks from Kitchen Press, Thanks for Sending the Engine (2007) and My Fear of X (forthcoming). She is also co-author, with Kathleen Rooney, of Something Really Wonderful (dancing girl press, 2007) and That Tiny Insane Voluptuousness (Otoliths, 2008).
The poem originally appear in COMBATIVES, the print offshoot of H_NGM-N.
Posted ∀ at 7:43 AM No comments: 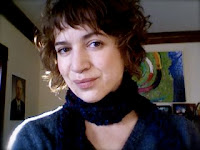 Elisabeth Workman's poems have appeared or are forthcoming in fourW, Absent, Alice Blue Review, and West Wind Review, among others. Her chapbooks include _a city_a cloud_ (Dusie 2006) and _Opolis_ (Dusie 2007). She works for a visual art museum in Minneapolis.
Posted ∀ at 6:57 AM No comments:

Crustyflaps
will crush your teeth into smiling


My eye-pods break open &
A hundred other eyes
roll out


I’m filing down my hooves


I’m waiting for Mino
with a thousand open legs 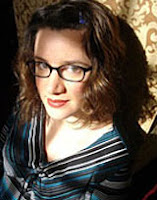 Lara Glenum is the author of The Hounds of No (Action Books, 2005) and the about-to-be-released Maximum Gaga (Action Books), from which the above poems are taken. She is also the co-editor of Gurlesque, an anthology of contemporary women's poetry and visual art, with Arielle Greenberg (Saturnalia Books, 2009). She lives in Athens, GA.
Posted ∀ at 3:47 AM 1 comment: 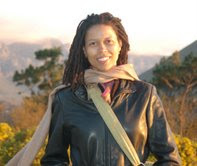 Evie Shockley is the author of a half-red sea (2006) and two chapbooks, 31 words * prose poems (2007) and The Gorgon Goddess (2001). In 2007, she guest edited ~QUEST~, a special issue of MiPoesias featuring the work of contemporary African American poets. Currently a guest editor of jubilat, she teaches at Rutgers University, New Brunswick.
Posted ∀ at 4:54 AM 2 comments:

and stepping on the undead
the suburb-surviving zombies

I spear the bloody head onto the fence post

Hoa Nguyen lives in Austin TX with the poet Dale Smith and their two sons. Together they edit the book imprint Skanky Possum and curate a reading series. Forthcoming books by Hoa include "Kiss A Bomb Tattoo" (effing) and "Hecate Lochia" (Hot Whiskey). She is an Aquarius and a Fire Horse.
Posted ∀ at 5:00 PM No comments:

Stephanie Strickland’s fifth book of poems, Zone : Zero, just published by Ahsahta, includes two interactive poems on CD. She co-edited Electronic Literature Collection/1 and a recent issue of the Iowa Review Web. She has taught experimental poetry and hypermedia literature at many colleges and universities, most recently the University of Utah.


3 from "Virginia or the
mud-flap girl"

suspect & friend
the missing guard, the holy nightblock
these smally cells, fair linguist
as extreme as a worn & fractured bank-note
the folks who'd been attending their lives arrived late
in soiled dresses
the daffy windbreak, the goody bell-hop,
this flophouse ale


a little god comes in & protests
will as extensity holler
in all your original flapping sins,
your 17th century arcade
beating down staunchest river
some summer slag-heap
in theory butler
bitten, plow
some jailed hintback
in the doctorlight

Doily Construct School of Itself 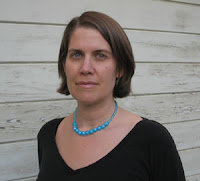 Elizabeth Treadwell is a proud member of the Irish, English, & Cherokee diasporas. She lives with her family in northern California. These are parts of her long poem, " Virginia or the mud-flap girl," which was inspired in part by Jimmie Durham's sculpture "Pocahontas' underwear." Her books include Chantry, Cornstarch Figurine, Birds &Fancies, and Wardolly.


In artistry and largess, rearrange them.
In anger, they are to be arranged, re-
arranged, then done again. They are angels—
rearrange them. They are disastrous. They will
resist. Yet, do not cease. Glacial
in their garments, regal in glades and groves,

in dense grasses—distressful—
as they, in-inebriate, sling back sober growlers
of lager, or indifferently wrangle geraniums
into itty pots, better at to tend
and to protect than obstetric nurses
are, or prostitutes heeled precariously above

loved window boxes—rearrange them.
Their glands and ovaries. Make their knotless
hearts bear the pendulous weight of
bowels. Make them start
to resemble humanity. Deform them
with anatomy. Given the difficulty of insides,

they would not be so aether. Flawlessness
is mere, a porcelain mug in which such
unbearabilities steep: terrible
symmetry and so forth. It is time
they were not right. It is time they were
treated to the vast interior they lack.

Next to the sofa—sit the wingback, float
the ottoman in front of puddled drapes.
Curl up inside an angel: be
the fetus. In this way, they
could be made to matter. Off heads
of pins, not new age schtick, no longer

beads on philosophical abaci, nor tendrils
withering in the schizophrenic mind
—but bodied. So they may truly be
ours and us theirs, we'd say. All the while
we'd know—bothered not—the translation
into mother to be exaltation. Murder also.

Kirsten Kaschock is the author of _Unfathoms_ (Slope Editions 2004) and _a beautiful name/for a girl_ (upcoming from Ahsahta Press). She is a PhD student in dance at Temple University in Philadelphia where she lives with her three sons and their father.