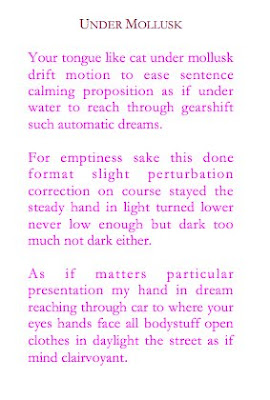 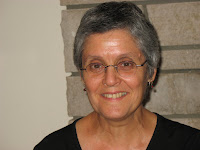 Judith Roitman was born and raised in New York City; she lived in San Francisco and Boston areas; now in Lawrence KS. Her work has appeared in various places, including First Intensity, Black Spring, Bird Dog, Locus Point (web), FO A RM... She has three chapbooks: The Stress of Meaning: Variations on a line of Susan Howe; Diamond Notebooks; Slippage, and one book, No Face.
Posted ∀ at 11:20 PM No comments:

from The Last 4 Things


Each tone, each color, has a different vibration. Everything was getting darker, “dimensional.” A woman came here once and fell. To her knees—it was a Sunday, I’ll never forget it. In those days, I was very small. I knew my own grief to be so small, nobody could find it. In winter, just the pilings, ropes; ice in black water, “as seen.”

All these shots are locked down. I can manage when the pressure is steady—packed with dark-tent, chemical boxes and the camera, an umbrella, a lamp. We talked about colors so much. Or sometimes I feel that the LIFE is there, waiting—but I don’t have the part. I know that everything can’t be important. They let me take down the curtains. Everything is slightly hidden from me, all the time. It’s dark. Did you sleep?

Someone’s yelling out there. Have I run out of luck? It’s dark—that always takes me back. Rereading our old mail. I have to try, don’t I? When you asked me about having a secret, I thought it was just a form of greeting.

Kate Greenstreet is the author of case sensitive (Ahsahta Press, 2006) and three chapbooks, Learning the Language (Etherdome Press, 2005), Rushes (above/ground press, 2007), and This is why I hurt you (Lame House Press, 2008). New work is forthcoming in jubilat, Saltgrass, Hotel Amerika, and Court Green. Her second book, The Last 4 Things, will be out from Ahsahta in September 2009. 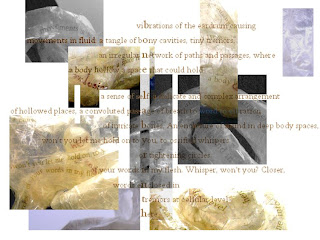 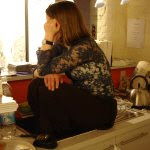 Helen White grew up in Britain and now lives in Ghent, Belgium, where she works as a translator and co-organizes the Krikri and Zaoem poetry festivals. Her visual poetry has been shown in exhibitions in Belgium, the Netherlands, Greece, Cyprus and Argentina, and appeared in journals including De Poëziekrant, Foursquare, Phoebe, Karagöz, The Big Ode and Womb.

or I see some ads at msnbc
wherein young women
in their 30's and younger
are being sales pitched
for anti-wrinkle creams
PUUUULEEEEZ!

or slimmer but with crepey skin

it doesn't seem to matter
to the man who lives with me
who is, just for the record
(okay ___and a little boast)
a quarter century younger than I am

absolutely none of that
going on here

being able to find positives
in anything that happens
(even the horrendous ones:
my favorite mantra at those times is
"but it'll make for good poems")
i.e., being able to say and believe
"There is no better life than this one."
will prevent you
hagging up
and you can transform instead
into
a pussy crone

in my soul I'm a middlewesterner

through and through
gobs of formal education:
PhD (History of Science)
post-doc (Psychology):
mainly though from
life and
reading and writing
spent my working life as a therapist (primarily border-line personality
diagnosed women)
and a planner of medical education curriculum change
I started writing poetry as soon as I learned how to write
then stopped for several decades before starting seriously
again when I was 55.
Posted ∀ at 3:56 AM 2 comments: 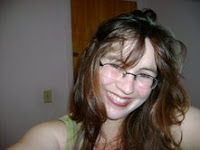