The Mind is a Muscle by K. Lorraine Graham 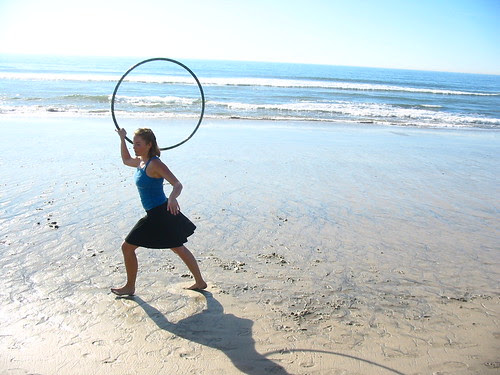 K. Lorraine Graham is a writer and visual artist. She is the author of Terminal Humming (Edge Books, May 2009) and several chapbooks, including Large Waves to Large Obstacles, forthcoming from Take Home Project. Her work has appeared or is forthcoming in Traffic, Area Sneaks, Foursquare and elsewhere. She currently lives in southern California with her partner, Mark Wallace, and Lester Young, a pacific parrotlet. You can find her online at terminalhumming.blogspot.com


There should be something in this piece about the fact that there are many Feminisms and so many kinds of Feminist poetry. Culture and language are neither universal nor static. There should also be sections in this little piece about camp and performance. I'd also like to talk about hippies and the circus, as well as the construction of animal subjectivities and how animals and women are often symbolically connected (Michelle Detoire is doing really interesting work along those lines). Probably I should also talk about aliens. In fact, I won't talk about any of these things directly, but maybe you can just try to imagine them as you read this. I will say probably say "power" and "structure" a lot.

A Feminist reader looks at a text and asks what it suggests, implicitly or explicitly, about women and gender. As a Feminist poet, I consider how my poems invite readers to think about gender and the ways gender can reaffirm and challenge cultural norms. My poetic practice is informed by both French Feminist theory then U.S. Feminist theory. Broadly speaking, though, I find the terms of French Feminism more helpful for thinking about my poetry. I'm less concerned with how to get women into institutions and positions of power than how to change the way institutions and power are constructured. Those two goals are connected, of course. Sometimes having women with economic and cultural power can change power structures, but often women with power may identify with those structures just as much as the people who created them: Margaret Thatcher. I'm interested in a Feminist poetics that critiques power structures and is alert to the roles that gender plays in creating, supporting and undermining such structures.

I am skeptical of an ecriture feminine, but Helen Cixous' description of binary oppositions and the typically subordinate place of the feminine within most symbolic orders remains very helpful. Cixous gave me a way to understand the relationship between language, culture and gender. I remember learning the word "bitch" in first grade and eventually realizing that the only way to insult a boy using this word was to call them a "son of a bitch." By now, this anecdote is a cliche--every Feminist has one like it; I'm still suprised by the ways everyday language reinforces cultural norms. I teach English as a foreign language, and I'm constantly having to explain the gendered and cultural connotation of words, how "groupie," for example, can refer to either a woman or a man but typically means a woman, how many insults are based on attacking or questioning someone's gender. My point is obvious. Still, the way we represent things matters. The words we choose and the way we put them together matters.

When I started working on my first book, Terminal Humming, (which will be out within weeks from Edge Books), I had four very general ideas in mind:

1) I wanted to write about how much employment and bureaucracy suck and
2) I wanted to write about how women and men interact.
3) I also wanted to really question my own emotional investment in these two cultural institutions--employment and romance--and I wanted to do it in a way that was as honest as possible. Finally,
4) I felt that none of the social and professional discourses I knew were sufficient enough to do this. I knew I'd need to play with everything, with words, sound, images, space, source, syntax, etc.

For me, writing is always an investigative process--an idea I initially got from Tina Darragh. I never begin a project knowing how it will end--that's also part of what I consider a Feminist poetics: even though everything I write is going to be inevitably caught up in cultural norms and expectations, I want my poems to push against such expectations, even as they acknowledge that they are caught up in them. So, I don't start with conclusions. Or, if I do have conclusions, I start by questioning them. These questions are based on a series of concerns that I want to address--usually some combination of something formal and thematic. Making the poem is a process of finding the boundaries of those concerns and edging them in different ways to see what happens. In order to be a Feminist writer I need to be a Feminist reader: Why don't I like this job? How do other people describe my job? How do I feel when I read the handbook of acronymns for the Department of Defense? How come I never got hooked on Sex and the City? Why do I love Star Trek so much? Why do my boyfriend's domestic fantasies freak me out so much?

The more I wrote about and researched employment, bureaucracy, and heterosexual love, the more worrisome and intertwined the connections between all three became. When I started writing lyric love poems that parodied bureaucratic and contractual language, I knew that I was ready to finish the project.

At its most basic, Feminism is a critique of power structures and the role that gender plays in those structures. A consideration of gender quickly, in my mind, extends to a concern with bodies and materiality--and not just women's bodies, either. If I'm really interested in a poetic investigation of power structures and my own relationship to them, then I don't see how I can avoid bodies. Poetry and Feminism aside, I don't really see how I can avoid bodies. Besides, meaning is social--it happens through contact with others. In my creative work, I like to play with an intense and exaggerated exploration of life as a female body but also an exploration of a withdrawal from the physical, even though that's impossible. In my recent readings, I’ve been looking to women like Lee Ann Brown and Julie Patton (who both recently performed at Cal State San Marcos), as well as recent work by Laura Elrick and Rodrigo Toscano while drawing on my own background in modern dance to incorporate movement and polyvocality into my performances. I have no idea if it's working--it feels nerdy and campy. But when my own work freaks me out, I feel like I'm on to something interesting.

All of that sounds very heady. Oh well. I agree with Yvonne Rainer that "the mind is a muscle." Here's a list of some of my feminist icons: Mina Loy, Djuna Barnes, the Baroness Elsa von Freytag-Loringhoven, Colette, Jean Rhys, Jane Bowles, Yvonne Rainer, Sophie Calle, Yoko Ono, Kathy Acker...
Posted ∀ at 1:47 AM

Thoroughly enjoyed this (and thought of aliens throughout--maybe that's why you like Star Trek btw).

Kate-Thank you! And yes, aliens and camp are definitely part of why I like Star Trek : )