Poetry and science. The etymology of the clitoris. The unnameable. The undefinable. We read our newly finished poems in the living room to Philip Good and Hector the dog. Phil took a picture.

The most difficult poetry assignment I ever envisioned is to write a 10-line poem about neutrinos with alternating lines containing a metaphor and a gerund. Here are Jennifer Karmin’s & my, Bernadette Mayer’s groundbreaking neutrino poems.

a neutrino is form and content
neutrinos enjoy exhaling the universe at 3:15am

a lepton, the neutrino is a clitoris
to us, a clit, maneuvering
past the explosion, neutrally, not neutralizing
it is a scandinavian country
taking no part in anything moving
a conscientious objector
unwilling to be party to any collision
but, a secretary of state, she has some weight
you know she has been being there
over two hundred trillion trillion trillion massless earths
are passing through the sun every second
not to speak of you, you muon monster!

p.s. if i say to my sister: i’m not me
i’m a neutrino, passing through you
is she still the same? 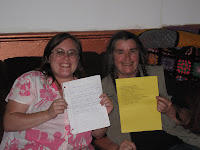 Jennifer Karmin has published, performed, exhibited, taught, and experimented with language in many forms. During the summer of 2009, she presented a durational performance on Buckminster Fuller at Chicago's Museum of Contemporary Art and a live improvisation of her text-sound epic Aaaaaaaaaaalice at The French Broad Institute of Time and the River. She also spent one week writing, reading, and laughing with Bernadette Mayer.

Bernadette Mayer is a poet and prose writer. In 1967, she received a BA from New School for Social Research. She has since edited the journal 0 TO 9 with Vito Acconci and the United Artists Press with Lewis Warsh, and worked as Director of St. Mark's Poetry Project. She is also known for her wonderful dancing. Her latest collection of writing is titled Poetry State Forest (New Directions).
Posted ∀ at 1:18 AM

Love it! You did it, the hardest form in the known(trino) universe!

You two are great!
James