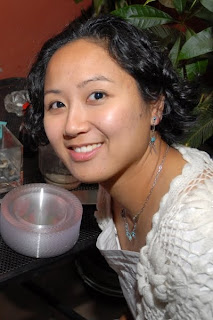 What shaped me as a person and as a poet are the deep connections to peoples’ stories and their struggles, and a deep commitment to working towards a better world, without oppression and exploitation. From a very young age, the more I sought to understand the world around me, understand my experiences, and where I fit in, the more I felt committed to issues dealing with my immigrant family’s story, my own people’s history—with all its conflicts and contradictions—and how that has shaped me as a woman, as a Filipina American. As I became more involved in social justice work and human rights work both here in the U.S. and in the Philippines, more and more the subject of my poetry addressed these issues of oppression and injustice.

I had been working with various poor and marginalized communities in the Philippines when I was abducted, held in secret detention, and tortured by the agents of the Philippine military on May 19, 2009. During those six days that I was in secret detention what came from my body was an internal language that kept repeating certain phrases, certain images. The poems that follow are very raw versions of poems. After surfacing, I wanted to commit to paper these images and words that kept repeating in my mind. During the solitary confinement, secret detention, and torture, it was my protest against the inhumanity and the violence, so I include them in their raw forms here as a testimony to that time.

The worst tortures came at night and I was forced to wear a blindfold and handcuffed the whole time. The aim of torture was not to kill me, not yet at least, but to incur the most amount of pain. Make me learn the many ways to die. The torturers had control of my body and my movements, but one thing I realized they could never control was my mind. I was made keenly aware of this, this was the one thing that I could control and I have to make a conscious choice not to relinquish this last freedom. The freedom to think and to create was what I did during the violence. As much as I could sing poetry, I sang. I sang in my head and I remembered my commitment to the people, my commitment to the cause of good, for truth, for a people fighting for the most basic of freedoms...


Amongst the many things the military took from me was over two years worth of my poems and writings. During my interrogation it was also something they would often refer to and taunt me about, and be angry because I was writing about human rights violations. They wanted to destroy this body of work and they wanted to destroy me because they thought it would destroy the people's stories and their struggles that I had been witness to. So a lot of my writing now is about reconstructing from memory what I had written during those past years and what I had been witness to working with the community. Many new poems were also born from my experience of disappearance and torture. But something very different about my poetry now is that, as I reconstruct, the language tends to be broken, and also not necessarily following any kind of structure. I now find myself experimenting more with poems. I am discovering that as I write, most of the poems seem to reject wanting to be in any certain form or structure.

The poem below are excerpts from “My Journal and The Interrogation,” which has three voices: the torturers; mine; and passages from my journals I remember during the torture, that represent the voices of the community.

Every day is still a struggle for me and every day I live with memories of that torture. It is almost a year since it happened. I still bear the physical scars of that torture, have sustained physical injuries, and there are also the invisible scars that last much longer, scars that are etched in my being forever.

After surfacing, I spent a lot of time with the families of the “desaparesidos,” or the “disappeared”—these are families whose loved ones were abducted by the military and still remain missing. I have come to realize that if there is a reason why I lived through this horrible experience, is to tell my story, which is also the story of many more still disappeared and tortured. The military cannot destroy these people's stories because no amount of state terror can crush the people's will to keep working towards genuine freedom and democracy. In fact, the actions of the military only further prove the tyranny of the Philippine government, which emboldens the people to continue to fight for their rights and pursue justice. The military also cannot stop me from writing and speaking about what I had been witness to. The family of the disappeared, the people still suffering under repression, and the many political activists that continue to risk their lives because they want a better world—all of them give me the inspiration, the support, and the courage to continue. So, for me, it is not an option not to talk about it, and because I am also a poet, I must write about it. So it has been an obsession for me to write.

What societal norms have dictated women to do since oppression existed is to be obedient, to be silent, and submissive. Once a woman breaks these norms she is seen as a threat especially in the Philippines, which is a country that is still very feudal and patriarchal. Women’s roles in society, the economy, and politics are still very limited. U.S. foreign policy helps maintain this system in the Philippines. So women who transgress these norms and in addition become organized and start to advocate for their rights and empowerment are seen as a threat by mainstream society and the government.

One of the most heinous forms of violence against women is state-sponsored violence as a result of political repression. Rape, other sexual violence, and sexual harassment as torture are often used by the government through its police, military, and security agents to show dominance and power. The aims of which is to destroy the ability of the woman to continue their political work, to instill fear and mistrust, and terrorize them.

Staying silent is then not an option for me. As a woman who rages against repression of women through state-violence; who rages at what the torturers did to me; what they did to many other women and worse; who rages against all forms of violence against women; silence is not an option. Especially because news about the killings, the disappearances, and the torture in the Philippines is something that is not covered very often in the United States media, and not enough people are aware in the U.S. of this issue, even though the Philippines is one of the largest recipients of U.S. military aid in Asia.

Regarding issues of human rights and torture, there is a culture of impunity and silence that exists, that is allowed to exist by powerful countries and powerful interests. These interests block our access to information, and instead provides us with misinformation. More and more our society and mainstream culture numbs us and takes away our critical thinking. This is very dangerous for democracy. I think it makes people afraid. Sometimes people fear what they don't understand, sometimes they fear even after they understand, and it stops there. We must move past this fear, past denial, past indifference.

For me, one way of speaking about these issues is through my poetry. Through my poetry I hope that more people will know about the human rights violations happening in the Philippines, and all over the world. More than this, I hope it inspires more people to support the movement to end all human rights violations, end torture and state repression anywhere it happens. I write and I speak because I must not relinquish that last freedom, freedom to think, to create, to rage against injustice.

If you ask what my Kundiman is, what is my love song, it continues to be about the people and their stories, their struggles, and a commitment to truth, justice, and freedom.

(original formatting on poems altered due to blog constraints)
____________
Melissa Roxas is a poet, writer, and activist.  She was a 2004 PEN USA Rosenthal Emerging Voices Fellow for poetry, a Kundiman Fellow for 2005 and 2006, and was selected to participate in Great Leap Collaboratory in 2006.

At Kundiman, I had two women teachers, Aimee Nezhukumatathil and Sarah Gambito, but I also consider my other fellow kundis during those retreats as teachers.
Posted ∀ at 10:55 PM