Multiple essays in this series have come to the conclusion that one of the best tools we have for fighting rape culture is our art. By writing and publishing and promoting the stories of survivors over those of the abusers, we can change the cultural narrative. With this goal in mind, Delirious Hem presents this micro-series of poems dealing with rape, assault, abuse, and rape culture. Read what Shevaun has to say about her decision to publish this poem here. --SBB

Even Though We Were Vegetarian

At any moment we are no more than six feet from a spider.
One night, as you slept, I watched one
appear on the horizon of your neck,

like in a Western, the hero returning—
it climbed over the dune of your body,
up the steep face of your chin, and almost

lurched into your open mouth,
two of its legs waving in the air like
the horse being pulled back from the canyon.

I watched all this without waking you, I watched
the spider dip its leg onto your tongue
and decide to proceed forward.

Earlier that day we were at the fountain.
I stood with water around my ankles and stomped like
I was making wine, just to splash you. You said

I was being childish, I threw a nickel in the fountain
and said I wish you wouldn’t call me names,
it counted five times over. That was the day

you told me you were only staying with me so
I wouldn’t turn you into the police.  “Before you,” you said,
and I did, I mocked you in a whiny voice, because

I knew what was coming next. In unison we said,
“I was only afraid of mayonnaise.”
It had become the punch line of our relationship,

begun at a party where I lurked underneath my
ex-boyfriend’s arm, where my eyes further lurked
beneath thick bangs and makeup, scanning the room

and returning to you because you were laughing
at my shirt for power tools—I’ve Got Beaver Fever,
it said, while below, two beavers wielded chainsaws.

I liked a man with a sense of humor, which
I assumed explained your unibrow, your pants
tighter than tendons. You know this, and what followed:

your vomiting in the backyard, then coming up
to me with your hand over your mouth to ask for my number.
Days later, the courtship at the used bookstore

where you circled around me like a buzzard, until
you started pressing your body against mine,
brushing your mouth against my ear, unlike

really hot stuff meant only for the bathtub.
We brought our bags of books to the car,
where you pawed at me like a breast-obsessed bear.

So I wasn’t wearing makeup the day of the party.
So my bangs were up. It’s my right
to change the story how I want to—just like how

after it happened I told you I had the right to call you
as many times at work as I wanted to in a day,
just to tell you to go to hell! and then hang up.

If I leave out the day I took all the Ritalin and the kitchen knife
and barricaded you from the apartment, it’s for both our sakes.
After all, I may be crazy, but you were the one who proposed.

Next came the meeting of friends, the rushed merging of two lives
like hands interweaving to make a church and its steeple.
You impressed them with your guacamole recipe, but

everyone thought we were moving too fast, including us.
“We’re not sleeping together,” we would say,
even though we were.

I’ve left out a six-foot-one problem, though, the ex-boyfriend.
I was still dating him on the side, which complicated things
when you and I moved in together.  Even my hairdresser was scandalized—

he called me his high maintenance client,
but maybe that was because of the bangs.
It was on his advice I decided to move out.

I can tell that I am moving too fast.
You were there. You know what happened.
I can slow down.

I can turn to the day
when everything shifted.
I had told you I was leaving.

I said we had to stop sleeping together.
I wanted to make things work with him.
You pretended it didn’t bother you, just

that you wanted a proper goodbye.
We were both naked. We had been messing around.
You were on top of me

when you penetrated.
I said no.
You kept going.

You said, this isn’t me doing this,
and then pulled out. Said,
that was me, the one who listened.

Penetrated again.
This isn’t me doing this
became your chant.

Then things became frantic.
You said we should go to the police
because you had just assaulted me,

I comforted you because other men
had done it before and I was fine.
Then more, you called your mother

who told you that you had done nothing
wrong: rapists don’t call their mothers
afterward, you called your ex-girlfriend,

the one who counseled assault survivors,
who said that this didn’t
count. And you convinced me to stay.

Then talk of your grandmother’s engagement ring,
and your mother and aunt took us shopping
for cheap, on trend furniture for our new life together.

I’d moved back in. I swear the apartment was now smaller,
we were always bumping into each other like
shopping carts at the grocery store. But I had my moments

alone. Like the weekend you were away for work, meaning
an intense two days of hotel sex, though it was
with one of your coworkers. I ordered movies

off of your pay-per-view account and let them play
in the other room on mute. And at night, when you slept so peacefully,
I paced through the rooms of our apartment and cried.

When I think of those nights, I think of the water tap
that never stopped leaking, no matter how many times
we talked about fixing it. That, and the shadows cast

by the window’s security bars. Sometimes I stood so they framed
my face, hoping I looked beautifully sad to the women hooking outside,
staring back at me, thinking, now there’s a girl with troubles. 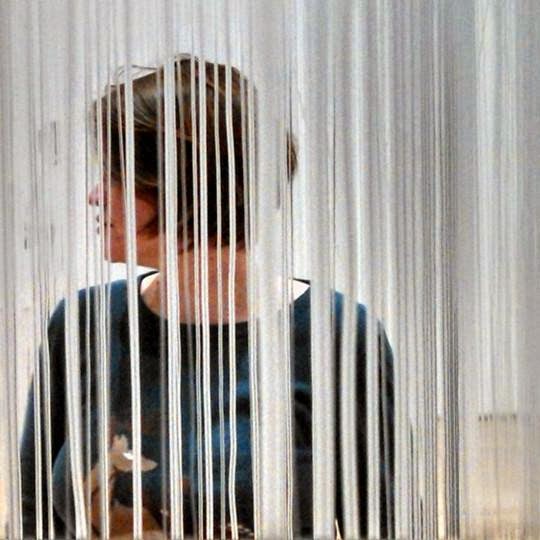 Shevaun Brannigan has been published in Best New Poets 2012, among other journals, and leads workshops at her local Domestic Violence Shelter.
Posted ∀ at 8:11 AM